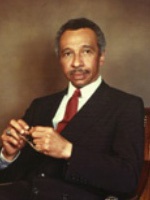 BALTIMORE — Parren J. Mitchell, an eloquent, but soft-spoken man who was a founding member of the Congressional Black Caucus and a champion of civil rights, has died.
Mitchell, 85, had been in intensive care and died on Memorial Day.
He had been living in a nursing home since suffering a series of strokes several years earlier and died of complications from pneumonia, according to his nephew, former state Sen. Michael Mitchell.
"He had a very good life," Mitchell said.
Parren Mitchell was a member of one of the country's prominent civil rights families, dubbed the "Black Kennedys" for their extensive record of service. His brother, Clarence Mitchell Jr. helped shepherd the major civil rights legislation of the late 1950s and 1960s as the NAACP's principal lobbyist, and was known as the 101st Senator. Parren Mitchell's sister-in-law, Juanita Jackson Mitchell, was the longtime head and legal counsel of the Maryland NAACP.
Parren Mitchell was elected to the U.S. House of Representatives from Baltimore in 1970 after a contentious primary battle against Samuel Friedel that was decided by 38 votes. Friedel had held the seat since 1952.
Mitchell served eight terms in the 7th District before stepping down in 1986 to be running mate to former attorney general Stephen Sachs in his unsuccessful bid for governor. The Sachs ticket was defeated in a Democratic primary by then-Baltimore Mayor William Donald Schaefer.
Mitchell also served as a political mentor to former congressman and NAACP President Kweisi Mfume.
"He helped shape and define an era," said Mfume, adding that he felt he had lost a second father. "He wasn't just going up against a doctrine, a lot of times he was going up against the government and that required a special courage. He had the heart of a lion."
"Throughout his life, Congressman Mitchell dedicated himself to opening the doors to opportunity for all Americans," said Cummings in a prepared statement. "He was a true servant leader, never concerning himself about fame or fortune but, rather, devoting himself entirely to uplifting the people he represented."
Governor Martin O'Malley said Mitchell was "a transformational leader," and a source of inspiration.
"In the midst of a time of upheaval and change, he saw clearly where our nation's ongoing struggle for justice must head next — economic opportunity for all," O'Malley said in a statement.
Lt. Governor Anthony Brown issued a statement describing Mitchell as "a true warrior for equal rights."
Born in Baltimore in 1922, Mitchell was a graduate of Morgan State College (now Morgan State University), and was the first Black person to earn a master's degree from the University of Maryland's main College Park campus.
Mitchell served as a commissioned officer in the U.S. Army during World War II, and received the Purple Heart.
Although confined to a wheelchair and in failing health, Mitchell remained a fiery advocate for change.
"I saw him a couple of months ago and he grabbed me by the collar and said 'never stop giving them hell,' " Mfume remembered.
—The Associated Press