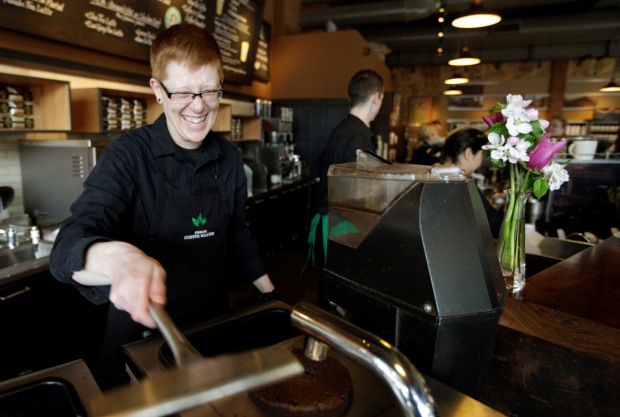 NEW YORK (AP) — Starbucks is giving its baristas a bargain on an online college degree.

The company is partnering with Arizona State University to make an undergraduate education available at a steep discount to 135,000 U.S. employees who work at least 20 hours a week. Workers will be able to choose from 40 educational programs, and they won't be required to stay at Starbucks after earning the degree.

For freshman and sophomore years, students would pay a greatly reduced tuition after factoring in a scholarship from Starbucks, ASU and financial aid, such as Pell grants. For the junior and senior years, Starbucks would reimburse any money that workers pay out of pocket.

That means employees who already have two years of college under their belts would be able to finish school at no cost.

CEO Howard Schultz plans to make the announcement Monday at the Times Center in New York City, where Education Secretary Arne Duncan will be in attendance, along with 340 Starbucks employees and their families.

Starbucks already has program that reimburses workers for up to $1,000 a year at City University of Seattleor at Strayer University. Starbucks says that will be phased out by 2015 in favor of the new program, which is far more generous.

The Seattle company doesn't know how many of its workers will apply, and it isn't saying how much the program might cost it. Tuition for an online degree at ASU is about $10,000 a year, although it can vary depending on the program. Many Starbucks workers would likely qualify for a Pell grant, which can be worth as much as $5,730.

Michael Bojorquez Echeverria, a 23-year-old Starbucks worker from Los Angeles, was flown to New York City by the company for the event Monday. He said that he works 60 to 75 hours a week, including a second job, and also attends community college.

He hopes the program will allow him to reduce those hours and focus on school, where he does not pay tuition because of wavers. But he is applying for the Arizona State University program because he feels there will be greater certainty about financial assistance.

He says he will miss the socialization that occurs on campus.

"But hey, if they're going to be paying my fees, I can manage," he said.

Cliff Burrows, head of the Americas for Starbucks, said he hopes the program will encourage other companies to offer similar benefits. He added that Starbucks plans to look at expanding the educational perks to workers overseas.

The financial terms of Starbucks' agreement with Arizona State are not being disclosed.

Starbucks workers would have to meet the same admission standards as other students at ASU. Only workers at Starbucks' 8,200 company-operated stores would be eligible. Another 4,500 Starbucks locations are operated by franchisees.

The program is also available to Starbucks' other chains, including Teavana tea shops and Seattle's Best.