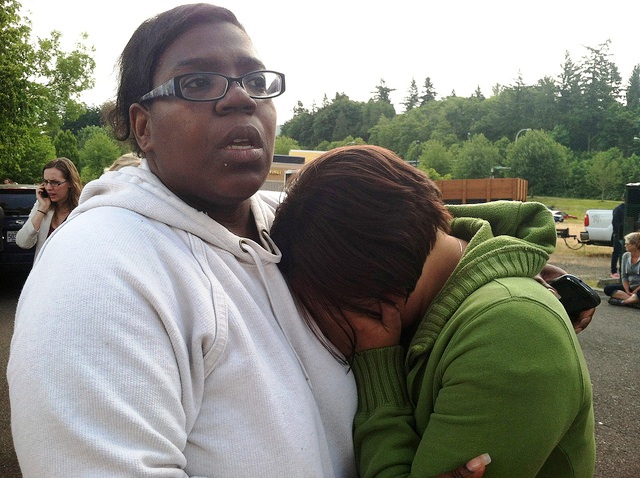 Tears, worried faces and emotional reunions at the Fred Meyers store in Wood Village Oregon, as students and parents were reunited after a shooting at Reynolds High School. Photo by Helen Silvis

Fatal shootings from Seattle to Portland rocked the Pacific Northwest over the past week, leaving diverse communities calling for prayer — and policy — to address gun violence.

First, a double fatal shooting early Sunday morning in the Leschi neighborhood claimed the lives of Ahmed Said, 27, and Dwone Anderson-Young, 23. Police said the murders were not gang-related, the victims had no criminal history, but at least one was known to be gay. Matalepuna Malu, 26, a native of Samoa, turned himself in and has been arrested in the case.

On Thursday, a mass shooting at Seattle Pacific University took the life of one student, and wounded two others. Prosecutors say the gunman, Aaron Ybarra, 26, had stopped taking medication for a mental health condition before brandishing a rifle and taking the life of Portland native Paul Lee, 19. He's been charged with one count of first-degree murder and two counts of attempted murder.

In a third unrelated incident in Seattle, police say 30 shots were fired in the International District early Saturday morning, killing 27-year-old Mohammad Osman and wounding several others. There are no suspects.

In Kennewick Washington, 16-year-old Kaitlin Deborah Chavallo and her 12-year-old stepbrother Ethan Andrew Austin were found dead in their home Monday with multiple gunshot wounds; police are still investigating that case and have not identified the shooter.

Also Monday, husband and wife were found dead in their Vancouver, Wash. home; their 23-year-old son was also shot but is expected to live, However the family dog was also shot to death. Police there say the husband, Danny Lee Luster, had been out of work and was despondent.

Meanwhile in Portland, on Tuesday morning, 14-year-old Jared Michael Padgett shot to death a fellow freshman student, Emilio Hoffman. and wounded a teacher at Reynolds High School before taking his own life. Details are still emerging in that case.

The Seattle killings came almost exactly two years after the Café Racer shootings, in which a mentally disturbed gunman murdered four people before turning the gun on himself.

And last month, Jesse Willard of North Portland, shot his four-year-old daughter to death before committing suicide; the mother and an older daughter had not been home at the time.

“For the third time in a week, Seattle has suffered a devastating loss of life as a result of guns,” Murray said Saturday morning.

“Once again it is members are East African community to feel the pain of this violence most directly. And once again, we as a city together mourn the loss of one of our young men take it too soon.”

In Portland on Tuesday morning, Mayor Charlie Hales expressed the shocked feelings of many.

“There are no words to fully express our sorrow over the shooting at Reynolds High School. We want the students, the parents and the educators – in fact, the whole community – to know that they are in our hearts and our prayers today.”

“It is long past time for action. We renew our call for leaders to act in the interest of our children and families to ensure that our schools are safe sanctuaries. We must pass sensible reforms that can help prevent our children, and those who teach and nurture them, from being gunned down. And we will work with our affiliate and the entire Reynolds High School community to help them heal and to restore a sense of safety and security.”

“To put our gun violence into perspective, the long and costly war in Afghanistan has claimed the lives of 13 Americans since April 19, including five special ops members killed in friendly fire today,” he said in a statement issued in advance to the media.

“Of the spree of violence in the 37th District over the last seven weeks, yesterday’s shooting is the third one that has devastated people working on my state Senate campaign. My field director’s cousin was killed on April 19 at 27th Ave S & South Lane St in the Central District. The close friend of one of my volunteers was killed Sunday morning at 12th Avenue S & S Main St. in Little Saigon.  Yesterday’s shooting took place at 51st Avenue S and S Brandon St. in the Seward Park area near the school of the daughter of my first campaign manager.”

Watanabe’s comments touched on an incident last Friday in Seattle’s Capitol District, where Seattle police were able to take a suicidal man with a handgun into custody without injuries.

“Yesterday’s shooting, near the Orca K-8 School, resulted in a lockdown at six neighborhood schools. While this incident ended with an arrest, the time has long since passed to do more than talk about the horrific violence in Central and Southeast Seattle, Skyway and North Renton where dozens of shootings and more than 12 people have been murdered since April 19.”