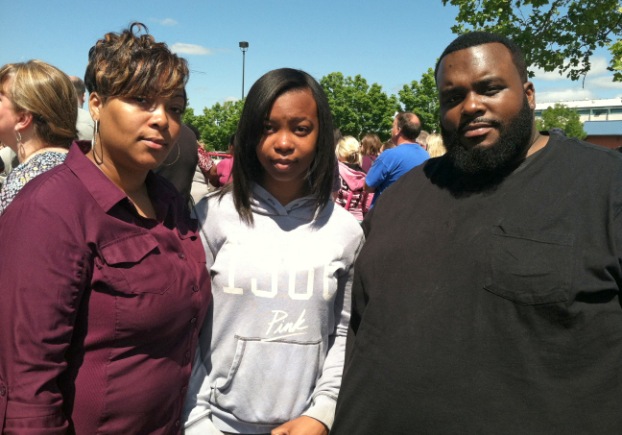 UPDATED: Victim identified as Emilio Hoffman, 14. Parents say they want you to know he was a great kid loved by all.

PHOTO: Nyasia Harris, 15, was reunited with her parents Cherana and Eric Harris. See more photos of parents reuniting with students on The Skanner News Flickr page.

Tears, worried faces and emotional reunions at the Fred Meyers store in Wood Village Oregon, as students and parents were reunited after a shooting at Reynolds High School. 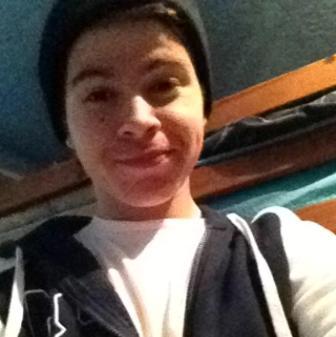 “We have identified the victim as Emilio Hoffman, 14, a freshman at Reynolds High School,” Anderson said.

“I met with the parents of Emilio and they are devastated. They want you to know that he was a great kid, and he was loved by all.

“This is a tragedy that affects our whole community. It is not supposed to happen to any school or any community.”

Two school resource officers were first on the scene and together with a tactical response unit they protected the school.

Physical education instructor Todd Rispler was identified as the teacher who was shot and superficially wounded.  Anderson thanked Rispler who he said alerted the school and started the lockdown despite his injury. Rispler was treated at the school.

Anderson said the gunman was dead. Police believe they have identified the gunman, but they are not ready to release his name.

Troutdale police said the shooter was found dead slumped over in a bathroom, apparently from a self-inflicted gunshot.  But Anderson said these reports were unconfirmed.

“I want to thank all the law enforcement agencies that came to assist us as well as the non-governmental agencies such as the trauma intervention program,” Anderson said. “There will be several days of healing and ongoing attention given to the students and staff, and anybody impacted by this tragedy.”

Anderson said an additional gun had been found in possession of another person but it was unconnected to the shooting. He said that person is now in police custody.

Troutdale Mayor Doug Daoust praised the sheriff’s office and police departments who coordinated the response.  He asked witnesses to come forward with any information. They can call the tip line at 503-250-7943.

Hundreds of parents waited anxiously in a parking lot as students were checked for weapons and transported in buses to the meeting site. A circle was taped off inside the parking lot. Police asked parents and media to remain outside the yellow and red tape. As buses rolled up, students exited in a stream, into the parking lot. Teachers, law enforcement and emergency responders were on hand to make sure the students had help if they needed it.

Students didn't immediately arrive. When they did, they all had different stories to tell. Some seniors, who were not in school were waiting at the parking lot to see their friends and girlfriends.

Latralle Shanks said he had been on his way to class when the lockdown was announced. With other students he sheltered in the Science building. Some of the students who had been at ROTC drill had weapons wth them, he said. Everyone stayed calm, and he felt safe with his teachers. Latralle was reunited with his mom Tammy Shanks.

Fred Meyer staff handed out water bottles and cookies. Some parents said they wanted to strengthen the community.

One parent (who requested to remain anonymous) said she knew a lot of the other parents there, because their children had attended the same elementary and middle schools. As they grew up, she said, the  young people had gone in different directions. Now she wished the parents could stay in better touch, she said.  And maybe parents of high schoolers should make more effort to engage with the schools.

President Obama spoke out in Washington DC saying his greatest frustration is that Congress has failed to pass any common-sense gun control measures.

“We are the only developed country where this happens,” he said. “And it’s happening once a week.”

Students, families and anyone traumatized by the shooting can see a crisis counselor at Mt. Hood Community College gymnasium.  About 50 counselors from Multnomah County, FBI Victim's Services, and Trauma Intervention Program and the Reynolds School District will be on hand from 7a.m.-7p.m. Wednesday June 11. Or you can call the Multnomah County Mental Health Crisis line at 503-988-4888.

The nonprofit journalism nonprofit ProPublica recently published an investigation into violence and shootings.  In an interview Dr. Jeffrey Swanson, a psychiatrist and Duke University professor said:

“ We need to think of violence itself as a communicable disease. We have kids growing up exposed to terrible trauma. We did a study some years ago, looking at [violence risk] among people with serious mental illness. The three risk factors we found were most important: first, a history of violent victimization early in life, second, substance abuse, and the third is exposure to violence in the environment around you. People who had none of those risk factors ― even with bipolar disorder and schizophrenia ― had very low rates of violent behavior.”

“Our hearts go out to the students, staff and families affected by this morning’s tragedy,” she said. “A public health approach to violence recognizes both the acute moment of violence and the vicarious long-term effects of exposure to violence.

“It’s in moments like this when communities come together through strength and resiliency to heal, and we are here to help in any way we can.”