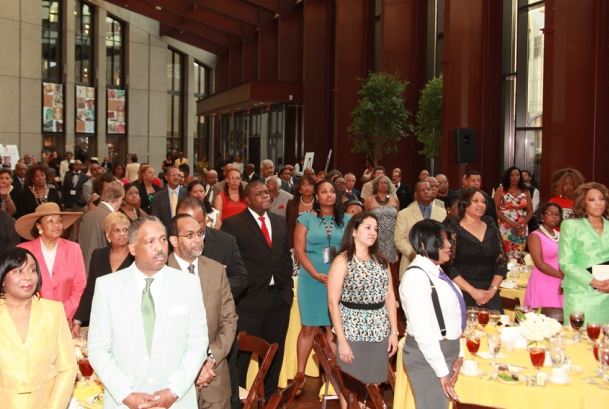 PHOTO: Delegates to the 2013 NNPA Convention in Nashville.

Overview of the Past 182 years of the Black Press: by Dr. Clint C. Wilson, II, Department of Journalism, Howard University

In 1827 a group of prominent free African American citizens from states along the Eastern seaboard met in the New York City home of Bostin Crummell to discuss means to communicate their views on the various social, political and economic issues that commonly confronted them and their respective communities. Although Black citizens utilized the church and social and fraternal organizations as a means of collective expression and dialogue, the usual channels of public media - particularly newspapers - were denied to them. Exacerbating the problem was the fact that elements of the established press routinely denigrated African Americans in print, even to the extent of questioning both the integrity and morality of the entire race.

The most significant outcome of the meeting at Mr. Crummell's house in the winter of 1827 was the decision to begin publication of the first newspaper produced by Black Americans, Freedom's Journal. Two attendees at the meeting, Rev. Samuel Cornish and John B. Russwurm, became the paper's editors. Although well intentioned white citizens sometimes defended the honor of African Americans in public forums, the editors of Freedom's Journal proclaimed in the first issue, "Too long have others spoken for us ... we wish to plead our own cause ."

During the 180 years since the appearance of Freedom's Journal, the Black Press has chronicled and commented upon events as they have occurred and impacted upon African Americans. Throughout that time the Black Press has given voice to the struggles of African Americans as they have sought to overcome the effects of enslavement and discrimination to attain social equality - it has continued to "plead the cause."

Over the years the list of contributors to the Black Press who have lent their talents as publishers, editors, journalists, columnists and cartoonists has included the greatest names in American history. Among them are Frederick Douglass, W.E.B. DuBois, Ida B. Wells Barnett, Langston Hughes, Romare Bearden, James Weldon Johnson, Mary Mcl eod Bethune and Daisy Bates.

In 1941, under the urging of John Sengstacke of the Chicago Defender, a meeting of leading Black publishers from across the nation was called in Chicago. Sengstacke said the meeting was designed for "harmonizing our energies in a common purpose for the benefit of Negro journalism." At least one representative from 22 publications attended the meeting and the group decided to form the National Negro Publishers Association. In 1956, the trade association of the nation's Black Press was renamed the National Newspaper Publishers Association. Today the NNPA is comprised of more than 200 Black newspapers in the U.S. and the Virgin Islands. NNPA newspapers have a combined readership of 15 million and the organization has forged ahead into the digital age with the creation of an electronic news service and the BlackPressUSA.com web site that enables the Black Press to provide real-time news and information to its national constituency. Thus, into the communication age of the new millennium NNPA - the Black Press of America - continues to fulfill the declaration set forth by Cornish and Russwurm: "We wish to plead our own cause."

Established more than 20 years ago, the NNPA Foundation is a 501 C(3) tax-exempt organization that has traditionally focused on pre-professional training and encouraging excellence in the industry. Its four traditional programs include: the Black Press Archives and Hall of Fame at Howard University, the A. Phillip Randolph Messenger Awards for Excellence in publishing and reporting, a summer internship program offering journalism students the opportunity to gain hands-on experience at Black newspapers, and a scholarship fund providing financial assistance to college and graduate students with an interest in journalism: In 2000, the foundation created the Black Press Institute and the Northstar Center for Civic Journalism as a means of revitali zing and enhancing its programmatic activities. '

When John H. Sengstacke, then in his 30s and heir to the controlling fortunes of the Robert S. Abbott Publishing Co., sent out his call for a meeting of Negro newspaper publishers in Chicago for February 29 through March 2, 1940, he had in mind a conference that would give major attention to advertising, editorial, and newsgathering problems and would substantially recognize inevitable and omnipresent racial matters. It had been difficult enough in former years to bring together a common purpose a large representation of the men-and a few women-who made up the Black Press. Yet, except for a five-year period, the Black newspaper publishers and editors had some form of national organization ever since the first meeting in Cincinnati in 1875 called by ex-Lieutenant Governor Pinchback of Louisiana. Before the 1940 call by Sengstacke, Carl Murphy had stressed the operating economies to be derived from a cooperative association of publishers, but even the bait of cheaper engraving costs, exchange of news and pictures, and a central clearing house for publishing problems and ideas was insufficient to overcome the drawbacks of distance, travel expense, sacrifice of time, and questionable benefits of membership in an organization.

The Negro newspaper had long proved its usefulness and its indispensability both for the Black masses and for the Negro elite. It had acquired a niche that the general press then had no interest in challenging and was, like its predecessors; the major dispenser of news and opinion for an isolated people. Other Negro groups had long since found the path to organization successful; among them were physicians, lawyers, clergy, land-grant college presidents, educators, musicians, and war veterans. The question was, "Why couldn't the publishers?" Sengstacke thought that the first step in joining hands was for Black publishers to get to know each other, and he said as much in his opening message at the first session of the 1940 conference. The meeting was, he said, designed for "harmonizing our energies in the common purpose for the benefit of Negro journalism." Sengstacke outlined the three-day program and left room for a catch-all item labeled "business in general." The newspapers represented at that first gathering included the leaders of the Negro fourth estate and three-fourths of the Negro newspaper circulation. Representatives from 20 commercial newspapers from all sections except the far western part of the country attended the Chicago conference. The following newspapers were represented:

In addition, three noncommercial newspapers were represented at the conference: