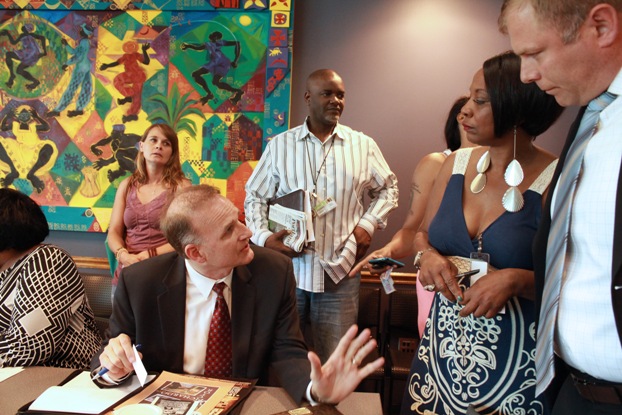 Two mothers who lost their sons in gang shootings are appealing for witnesses to come forward and help solve those crimes.  Brenda Davis and Lucy Mashia spoke at Portland’s gang task force meeting, Friday a.m. in the North Portland precinct.

“My son Terry Norris was murdered in 1999, but it feels to me like yesterday,” Davis said. “Every day I wait, hope and pray I will get that call to say they have solved the case. I know it’s not going to bring my baby back to me, but at least it will me some peace of mind.”

Norris left his home after getting a late night phone call, on Oct. 13, 1999.  He was found by police responding to reports of gunfire at around 4 a.m. at Peninsula Park. Norris was found dead in his car in the 6200 block of North Kirby Avenue.

Davis said every time she hears a siren or learns about a shooting, she thinks about the heartache another family will have to bear.  And she wants the madness to stop.

“That’s unacceptable to me,” she said, calling on the community to reject the idea that bringing killers to justice is “snitching.”

“It’s not a police problem; it’s a community problem,” Edwards said, and reframed the word snitch as “Somebody Needs Information That can Help.”

Also in the room were other relatives of  victims including Ronisha Harris, sister of Duriel Harris, shot outside the Fontainbleau nightclub in November 2013; and Teressa Raiford, aunt of Andre Payton, shot outside a downtown club in September 2010. Both those cases also remain unsolved.

Mashia lost her son Leonard LJ Irving June 26, 2011. A father of three, Irving was not a gang member. But he was caught in gunfire while trying to cool down an altercation between gang members and his nephew on 82nd Avenue.  Mashia said she knows who killed her son, but the two witnesses who could help police put the men in jail, won’t speak out.

“One of the men is in jail, but not for murder,” she said. “The other one is walking around like a little bully.”

The nephew, distraught after losing his uncle, initially made a mistaken identification. That means his testimony would not be enough to convict, she said. Breaking down as she spoke about  the painful impact on her grandchildren and family, Mashia said the community needed to say enough is enough.

“I miss him every day,” she said. “A hole is in my heart that nothing can fill. I will never be the same person…

The mothers got a standing ovation from the task force. 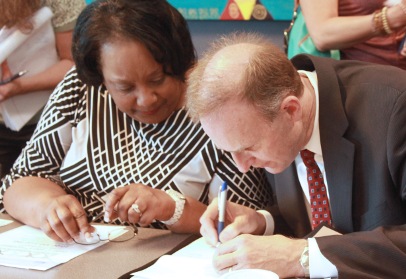 Multnomah County District Attorney Rod Underhill said he would personally arrange for one of those cases to be next in line for a cold case review.  He said two recent cold cases had been solved after a review.

Before hearing from the mothers, the task force heard reports from agencies working to support youth and families and combat violence.

Portland Police Bureau announced it will step up patrols this weekend because of an uptick in incidents of violence that left 16 people shot and one stabbed. Locations included Woodlawn Park, North Argyll Street, Southeast 138th and Stark, and 159th and Sandy.

So far this year Portland police have recorded 52 incidents up from 35 at the same time in 2013.

Job Corps is expanding and will have 30 extra places at the nearest site to Portland. Youth can get a high school diploma, a GED or get started in a career at this residential program. Information sessions: every other Monday 1p.m. at SE Works, 7916 SE Foster Rd. Suite 104, Portland and every Tuesday, 1 pm. at Worksource Metro East, 19421 SE Stark St., Gresham.

Saturday Marketplace: New Minds of Awareness will hold a marketplace with food, art, music and games on every 1st and 3rd Saturdays of the month from June 7- Sept 20. The marketplace will run from 10am to 3pm at 3802 NE Martin Luther King Jr. Blvd.

Read more about Lucy Mashia’s effort to bring her son’s killers to justice.