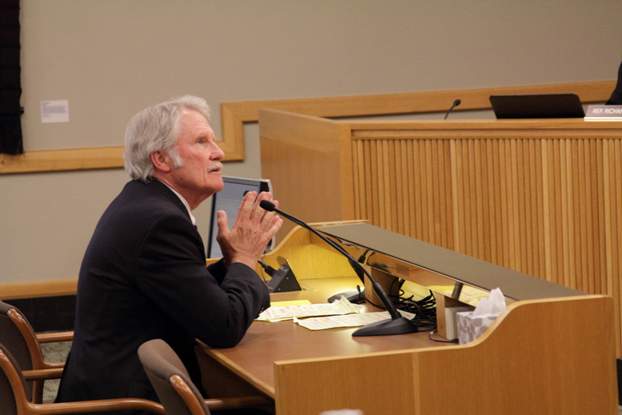 Gov. John Kitzhaber speaks to a state legislative committee in Salem, Ore., on Thursday, May 29, 2014. Kitzhaber is seeking a lawsuit against Oracle Corp. over Oregon's online health insurance enrollment system, the failure of which embarrassed the state and resulted in multiple investigations. (AP Photo/Chad Garland)

Whatever it was, chances are the Oregon Health Authority knows about it.

Nearly all medical claims paid in Oregon by private insurers, Medicaid and Medicare Advantage from the past three years and counting are stored in the All Payer All Claims database.

Now, Oregon Health Authority officials are working to strip the huge database of personally identifiable health information and make it available to the public on a searchable website, a tricky task given the wealth of private information it contains.

The hope is that making such information public will allow people to compare treatment costs and effectiveness.

Gretchen Morley, the Health Authority's health analytics director, told a group of state senators Wednesday the OHA will put out a call for proposals next month to build an online tool that will publicly present the data in an accessible way. Ideally, visitors will be able to search by county and ZIP code, she said.

OHA officials have been moving forward cautiously. Privacy issues have been thought through, Morley said.

The Oregon Health Authority is also working with the Oregon Insurance Division to add more price and quality data as well as information on the major drivers of health costs, such as heart disease or diabetes.

There is not yet a timeline on that project.

Sen. Chip Shields, D-Portland, urged the OHA to move swiftly, as the information garnered through the All Payer All Claims database could improve health care pricing transparency, an issue he said Oregon has scored poorly on in national reports.

"Part of my frustration is the information you have is pretty much inaccessible to the public," said Shields, a member of the Senate Interim Committee on Health Care and Human Services. "I'm not sure why that is."

OHA researchers are using the database, created through legislative approval in 2009, to generate quarterly reports analyzing the data. The first was released in March, and the next is scheduled for June.

Given the Affordable Care Act insurance mandate that kicked in this year and the Medicaid expansion that's already drawn more than 300,000 new enrollees in Oregon, the database is about to grow even larger. All insurers who cover at least 5,000 people are required to send their claims to it.

Morley said the OHA is working to obtain Medicare fee-for-service data from the federal government.

Currently, all of the claims data include personally identifiable information to ensure people are not counted more than once, Morley said. Once the data is publicly available, that information will be removed to comply with the federal Health Insurance Portability and Accountability Act.

Removing private information is not simple and requires creative thinking to make sure people won't be able to extract individual information, she said.

"Putting it on the web is complicated," Morley said. "You're trying to think about how that data could be used. You don't want to put out data that by itself doesn't identify somebody but combined with another data set could."

As of 2009, 10 states, including Oregon, were operating or developing such all-payer claims databases, according to a report by the National Conference of State Legislatures. Today, that number is 18, Morley said.

The databases have raised privacy concerns from some consumer groups that say they could reveal individuals' private health care information and make it available to anyone.

In Oregon, access is mainly reserved to staff members at OHA and Milliman, the Seattle-based actuarial firm the OHA contracts with to process the data, Morley said. Other researchers must apply to the Health Authority for access to limited data sets, she said.

The All Payer All Claims database discussion was part of Legislative Days at the Capitol, a series of informational hearings on topics that could result in future legislation or updates on existing legislation.

Information from: The Bulletin, http://www.bendbulletin.com