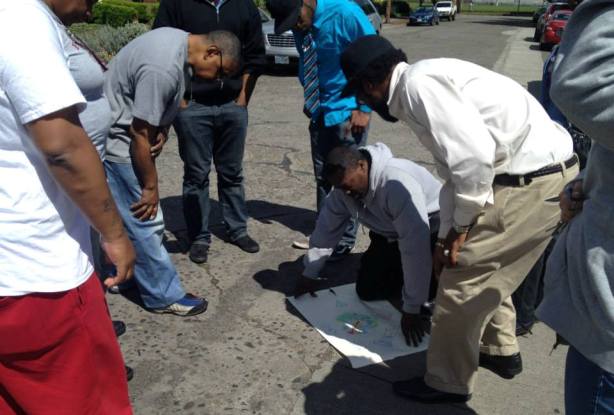 PHOTO:Volunteers take drawings into the North Killingsworth Court intersection to see how the design will fit into the street

Two projects in the Albina Killingsworth neighborhood aim to bring people together to build community through turning intersections into public gathering places.

The Unity Circle, a street painting at the intersection of N. Haight and Emerson Streets, got a fresh coat of paint May 31-June 1 as supporters of all ages came together for a painting and block party.

The Big Bang of Peace 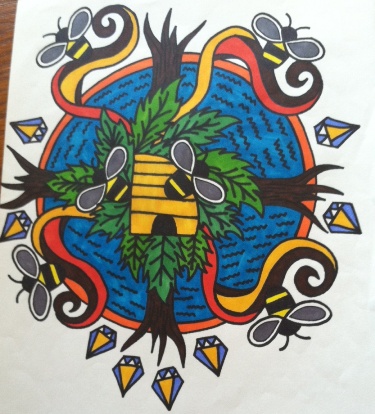 And just a few streets away, at the intersection of N. Borthwick and N. Killingsworth Court , youth and adults are working together to create a street painting called The Big Bang of Peace.

The Big Bang of Peace was started with the support of STRYVE, a federal violence prevention initiative. STRYVE (Striving to Reduce Youth Violence Everywhere), which is run through Multnomah County Health Department,  is sponsoring a range of projects this summer that will bring adults and youth together with the aim of building a stronger, safer community.

The Killingsworth Court intersection was chosen because of its location, bordered by Rosemary Anderson High School, Piedmont Church of Christ and the North Star Ballroom, with Jefferson High School just a block away. Church leaders have welcomed the project and are helping coordinate about 20 students and neighborhood residents, as they turn an intersection that has seen too much conflict into a place for gathering and friendship.

Youth involved in the project envisioned a design that features a tree whose roots extend into neighboring streets. The design also includes a honeybee theme because honey is known to increase immunity.

Next, artist Antwoine Thomas, who painted the mural in Rosewood/Rockwood at the intersection of 162nd and SE Stark St., will help the group finalize the design.

Neighbors of all ages are invited to take part. To find out when the group will meet next, contact STRYVE at 503-927-1823, or see Big Bang of Peace on Facebook.

Both the Big Bang of Peace and the Unity Circle have support from the Village Building Convergence, an annual 10-day placemaking festival, which aims to strengthen our urban communities through making our environment more welcoming and sustainable.  But while the Unity Circle was repainted during the convergence, May 23 -June 1, the Big Bang of Peace will be painted later this summer.

The Unity Circle first came into being in 2012, the vision of artist Kymberly Jeka. Living near the Haight and Emerson intersection, Jeka knew it marked the spot where DeAndre Clark, 25, had been shot and killed in 2011. And she knew dozens of students travel that route every day, on foot and in school buses. So she dreamed up the street painting as a way to build community and to bring beauty and hope to the intersection. 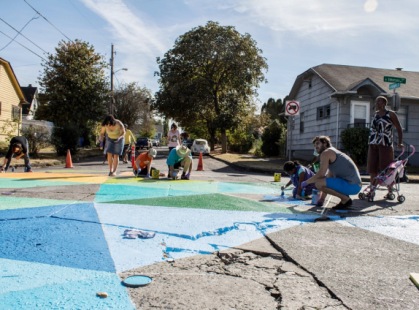 With support from neighbors the Unity Circle project passed city scrutiny and came to life. Jeka’s vision was inspired by the City Repair project. City repair works to build stronger communities in urban areas through bringing local people together to take control of their neighborhoods and turn them into places where neighbors can gather.

In 2012, Jeka succeeded in getting her project underway independently.  This time around, the Unity Circle repainting was part of The Village Building Convergence, City Repair’s annual 10-day placemaking festival, where neighbors get together to paint, build, plant and create unique projects that promote friendship among neighbors. The festival, which ran from May 23-June 1, includes more than 30 projects, as well as workshops, music and arts activities.

The Unity Circle street painting and block party were held over  the weekend of May 31—June 1. Volunteers helped paint, led children’s activities, looked after food and more. For more information contact Kymberly Jeka at [email protected] (858) 705-4418