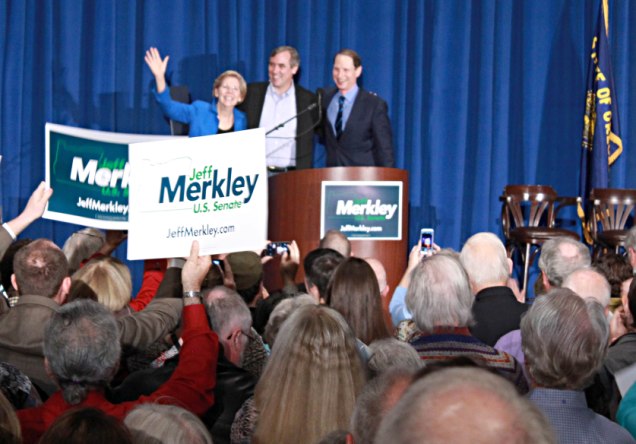 PHOTO: Sens. Merkley, Warren and Wyden were hailed by a rapturous crowd of supporters in the Portland Hilton

Sen. Elizabeth Warren received a rapturous welcome Wednesday from a crowd of Merkley supporters at the Portland Hilton. In Portland to support Sen. Merkley’s re-election campaign, Warren praised Merkley’s work on the banking committee, where he supported her effort to create the Consumer Finance Protection Bureau.

The fundraiser brought about 1,000 people to the afternoon rally.

Consumers needed protection from poor financial products, Warren said, just as they need government  to prevent the sale of other dangerous products. Warren, a Harvard professor at the time, took that idea to Washington and found politicians agreed the bureau was needed, but wouldn’t support her because they said the banks and large financial institutions would never let it pass.

Merkley was one of the few who fought with her, she said. And the CPFB has been able to return more than $70 million to consumers who were victims of illegal practices.

Warren praised Merkley’s record of standing up for ordinary citizens in Washington. The system is rigged in favor of the powerful, she said.

“In every fight to build opportunity in this country; in every fight to level the playing field; in every fight  for working families, the path has been steep. Throughout our history,  powerful interests have tried to capture Washington and rig the system in their favor. From tax policy to retirement security. The voices of hardworking people get drowned out by powerful industries and well-financed front groups. Those with power fight to make sure that every rule tilts in their favor.  And everyone else just gets left behind.”

Sen. Ron Wyden introduced Merkley and Warren and received loud cheers when he talked about Merkley’s support for net neutrality,  the principle that all internet traffic is delivered at the same speed.