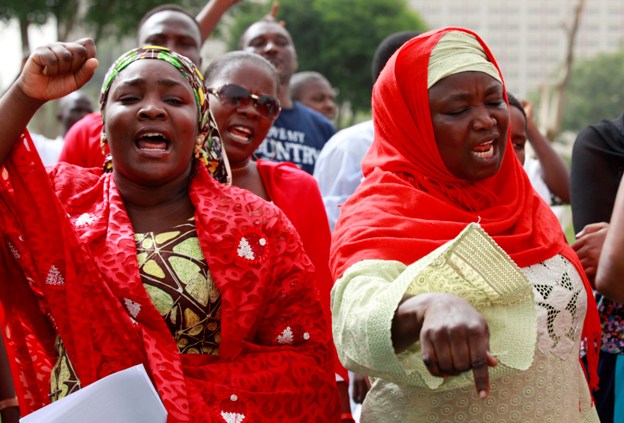 Women shout slogans during a rally calling on the Government to rescue the school girls kidnapped from the Chibok Government secondary school in Abuja, Nigeria, Sunday May 11, 2014. The failure to rescue the kidnapped girl students who remain captive after some four weeks has attracted mounting national and international outrage, and one of the teenagers who escaped from the Islamic extremists who abducted the hundreds of schoolgirls, science student Sarah Lawan said Sunday in an interview with The Associated Press the kidnapping was "too terrifying for words".                                            The waiting has left parents in agony, especially since they fear some of their daughters have been forced into marriage with their abductors for a nominal bride price of $12. Boko Haram leader Abubakar Shekau called the girls slaves in a video this week and vowed to sell them. (AP Photo/Sunday Alamba) (AP Photo/Sunday Alamba)

Why did the Nigerian Government refuse help to find girls

Portlanders are staging a protest against the kidnapping of more than 300 Nigerian girls May 14. Seattle advocates plan a film screening and discussion May 15.

The Portland rally is planned for 5-8 p.m., Wednesday, May 14 in Pioneer Courthouse Square in downtown Portland.

Speakers will give more information about the plight of the girls and how to support those working to secure their release. Everyone is encouraged to wear something red. That’s because organizers of the protest in Abuja, Nigeria, asked participants to wear red.

The Nigerian community of Oregon and S.W. Washington will join faith leaders, local elected officials and advocates to lead the protest.

“We want the girls brought safely to their homes. We support girls’ education and promote peace,” says Prince Vitalis Ogbeama, president of the Nigerian Community of Oregon and S.W. Washington.

“The Nigerian community here in Oregon and Southwest Washington shares the victims’ pain and suffering, and we are with them in our thoughts and prayers,” Ogbeama said.

“This is a time of trial for Nigeria and it is very reassuring to have the empathy and cooperation of friendly countries around the world, particularly the United States of America.”

In Seattle, the YMCA and Quest church have organized a screening of a documentary about girls worldwide, to be followed by a discussion. Bring Back Our Girls: “Girl Rising” documentary and discussion will run from 6 -8:30 p.m., Thursday May 15 at Q Café, 3223 15th Ave W.

The girls were taken from their school in Chibok, Nigeria, in the pre-dawn hours of April 15 — four weeks ago. Fifty-three girls escaped by themselves but 276 are still missing.

“I think the rallies are important to keep the light shining on the situation,” said Sue Gemmell, who organized the rally. “This situation is about abuse of women in Nigeria, but it is a global problem: the treatment of girls and women, and denying them education and rights. So this is a starting point that hopefully will improve the lives of women and men and girls and boys everywhere.”

Boko Haram militants, who have been engaged in a long-term insurgency in the region, released a video May 12, showing around 100 of the schoolgirls looking sad and frightened. The name Boko Haram can be translated as “Western education is sinful.”

One of the group’s leaders, Abubakar Shekau, said that girls kidnapped from Chibok in Northern Nigeria will not be seen again until the government frees his detained fighters. It is unknown how many Boko Haram fighters have been detained by the Nigerian government. The government’s own security forces also have been accused of widespread human rights abuses.

The kidnappings, have spurred global outrage and protests. Britain, the United States, France and China have sent experts to help the Nigerian government rescue the girls.

Led by President Goodluck Jonathan, the Nigerian government has been criticized for failing to act to prevent the kidnapping and to rescue the girls.

Jonathan’s government refused help from Britain, which was offered April 12, according to UK broadcaster, the BBC. The U.S. government also offered help, but it was almost a month before the president accepted.

According to a report from The Associated Press:

“Jonathan bristled last week when he said U.S. President Barack Obama, in a telephone conversation about aid, had brought up alleged human rights abuses by Nigerian security forces. Jonathan also acknowledged that his government might be penetrated by insurgents from Boko Haram, the extremist group that kidnapped the girls. Last year, he said he suspected Boko Haram terrorists might be in the executive, legislative and judiciary arms of government along with the police and armed forces.

The waiting has left parents in agony, especially since they fear some of their daughters have been forced into marriage with their abductors for a nominal bride price of $12. Boko Haram leader Abubakar Shekau called the girls slaves in a video this week and vowed to sell them.

"For a good 11 days, our daughters were sitting in one place," said Enoch Mark, the anguished father of two girls abducted from the Chibok Government Girls Secondary School. "They camped them near Chibok, not more than 30 kilometers, and no help in hand. For a good 11 days."

See more about the Nigerian Community of Oregon and SW Washington.

Wear Red: Education for all women and girls Facebook page.

Grassroots activists pushed the story into prominence through a twitter campaign, using the hashtag #BringBackOurGirls  The Portland Twitter campaign can be found at @BBOurGirlsPDX