Brian Stimson of The Skanner
Published: 23 May 2007 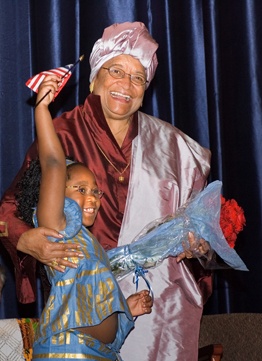 Greeted by a throng of Liberian refugees and immigrants at Concordia University last week, Liberian President Ellen Johnson-Sirleaf said she is trying to bring prosperity to her country after 14 years of brutal civil war.
"My old Liberian compatriots," she said. "I'm energized by the crowds we see here and the expressions of welcome and support on all of your faces."
Speaking a call-and-response greeting in her native tongue, Sirleaf ignited an energetic response from the audience. One man jumped up with outstretched arms and responded in his native Liberian language. When two armed Secret Service agents mistook his shouts of greeting for shouts of aggression, the audience of Liberians playfully shouted back.
Also present for this historical visit were many people from other African countries, as well as community residents. African attire could be seen throughout the enthusiastic crowd, who relished the importance of a head of state's visit to their neighborhood.
"In our history, there have been good times, good times associated with our independence as an African country, good times associated with our high rate of growth," Sirleaf, known as the "Iron Lady" said. "But we also had bad times, times associated with our failure to unite, our failure to respond to the needs of all of our people, our failure to promote equity and equal opportunity to thousands across the country. In the process we find ourselves reeling from the effects of a coup d'etat, a civil war that has gone on for 14 years, and that has destroyed much of the gains we had made."
Despite a devastating war that left hundreds of thousands dead, injured and fleeing the country, Sirleaf said the Liberian people have been given a second chance to improve their country and watch it flourish once again.
"The challenges are enormous to ensure each (Liberian) can go to bed knowing they are safe, knowing our security forces … will protect them rather then prey on them," she said.
Sirleaf — Africa's first female president and the first Black woman ever elected as head of state — took office on Jan. 16, 2006. It was the first election after former President Charles Taylor left office in 2003. Before taking office, Sirleaf had served as the Liberian minister of finance, director of the U.N. Development Program and as chairperson of the Commission on Good Governance for Liberia.
The Harvard-educated leader said Friday that one of her biggest challenges is redeveloping her country's broken educational system.
"Many (children) have not had the opportunity to go to school," she said. "Many were conscripted into warring factions. … Our challenge is to ensure we can heal the wounds of war."
The need to bring into Liberians' consciousness the fact that quality education is required for a prosperous nation is also a challenge, Sirleaf said.
"We have enforced universal primary education by removing all the fees in those schools," she said, highlighting the fact that enrollment has increased 40 percent.
Another huge problem facing Liberia's new leader is that nearly 70 percent of the country's men are out of work.
"That is a recipe for exposing their vulnerabilities and thereby exposing them to the chances that people will once again recruit them, bringing us back to war," Sirleaf warned.
She called on her government and people to fight corruption, "the cancer that has taken away from our country's natural resources."
Nearly all of Sirleaf's speech was aimed at the area's Liberian community, many of whom might not have been able to afford the evening's keynote speech at the Arlene Schnitzer Concert Hall. Sirleaf's visit was part of the World Affair Council's 2007 International Speaker series, which also featured President Bill Clinton. During the speech, Concordia President Charles Schlimpert announced that the university would grant a four-year, full ride scholarship to a Liberian native student of Sirleaf's choosing. The scholarship recipient has not yet been announced.
Many Liberian expatriates said Sirleaf's election was remarkable — and warranted, given the fact that men did nothing but bring war and turmoil for a decade and a half.
"It's easier (having a women as president) because the past decade has always been war," said Evelyn Jarbah, who came to the United States three-and-a-half years ago.
Another Liberian woman, Merci Paye, said it was time for a change.
"Men, they all just mess it up," she said. "She has the knowledge … she knows what she's doing and she's capable of doing it."
Maima Yeaney said Sirleaf's election has given women more courage and has given them power to stop abuse against women.
Gbehmee Flumo, who came to the United States 14 years ago, said Sirleaf, as a mother, understands what other mothers are going through with their own families.
Flumo also said he believes the country is heading in the right direction. His father is a lawyer in Liberia and represents people who lost their homes during war.
"For him, things are great," Flumo said.
An eight-year U.S. resident, Charles Diahn said Sirleaf is doing fine work bringing peace to his nation.
He admits unemployment is high, but expectations are also high, Diahn said.
"Not everyone expects to get a job at the same time," he said. "It's hard to get back on track."
Getting Liberia back on track is what keeps Sirleaf going. The president told Portlanders Friday she's positive about her country's future.
"We think Liberia is in the process of a renaissance," she said.