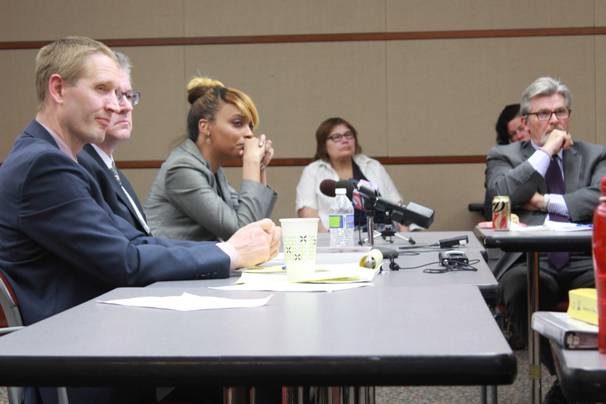 Photo: Latoya Harris speaks to the Citizens Review Committee May 7. Also pictured are: Mark McKechnie (next to Harris) and Joseph Hagedon (closest).

The arrest of a nine-year-old girl will lead to changes in Portland Police Bureau policy on how to work with children.

In May 2013 officers arrested the girl at her home after questioning her about a fight at school. Dissatisfied with the answers, they handcuffed her and took her downtown to be fingerprinted in her bathing suit. Her mother was not allowed to accompany her and had to take a bus downtown to pick her up. 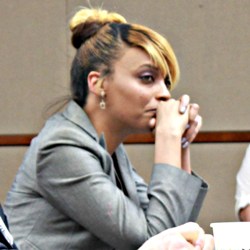 Latoya Harris, the girl’s mother lodged a complaint with the Independent Police Review, but was told the officers acted within policy. This week Harris spoke to the Citizens Review Committee, an 11-member group charged with helping the IPR director suggest improvements to police policy.

Harris cried as she recalled seeing her terrified daughter being taken away in a police car.

“Please make sure this does not happen to another child,” she said. “No child should be treated like that.”

With Harris at the meeting were Mark McKechnie, executive director of Youth Rights and Justice, a law nonprofit  that represents children; and Joseph Hagedon, chief supervising attorney for the Metropolitan Public Defender's juvenile unit.

$1·         Require an order from a juvenile court judge before a child under 10 can be taken into custody.

The case against the girl was dropped. Harris has said her daughter is traumatized by the incident. She was forced to change school after being teased by other children, and has never completely recovered her grades or confidence.

Police have asked members of the public to comment on their policies for arresting, fingerprinting, photographing  and taking children into custody.

The citizens review committee asked Harris to return along with Capt. Dave Famous, part of the police work group reviewing the policy.