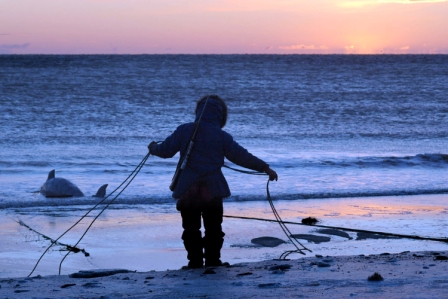 In this Nov. 8, 2005, file photo, Inupiat hunter Karlin Itchoak coils the rope of a subsistence net after pulling in a beluga whale at Cape Nome near Nome, Alaska, at sunset. Global warming is rapidly turning America into a stormy and dangerous place, with rising seas and disasters upending lives from flood-stricken Florida to the wildfire-ravaged West, according to a new U.S. federal scientific report released Tuesday, May 6, 2014. Climate change's assorted harms "are expected to become increasingly disruptive across the nation throughout this century and beyond," the National Climate Assessment concluded. (AP Photo/Laurent Dick, File)

The National Climate Assessment provides a detailed look at the regional and state-level effects of climate change. It lists key concerns for Washington, Idaho and Oregon:

— WATER RELATED CHALLENGES: Regional warming has been linked to changes in the amount and the timing of snowmelt, which provides a bulk of the region's water supply, the report says. Declining snowpack and changes in the snowmelt timing are already happening and will continue, reducing the supply of water for farming, communities and fish. Without changes, annual hydropower production is much more likely to decrease than to increase in the Columbia River basin; such hydropower changes could cost millions of dollars a year.

— COASTAL VULNERABILITY: Rising sea level, erosion and ocean acidification pose a major threat to infrastructure, ecosystems and economic activity, the report says. As sea levels continue to rise, more than 140,000 acres of coastal lands in Washington and Oregon that lie within 3.3 feet in elevation of high tide will be inundated more frequently. The rising acidity of the ocean also threatens oysters and other marine food web, such as Pacific salmon, while increasing coastal water temperatures and changing conditions may alter how well certain marine species survive.

— IMPACTS ON FOREST: Climate change will alter Northwest forests by increasing wildfire risk and insect and tree disease outbreaks, and by forcing long-term shifts in forest types and species, the report says. Those impacts are already causing widespread tree die-offs and are certain to cause more forest die-offs by 2040. Though wildfires are a natural part of the Northwest, warmer and drier conditions have helped boost the number and extent of wildfires in U.S. Western forests since 1970s, and that trend is expected to continue. Higher temperatures and outbreaks of mountain pine beetles, for example, area increasing pine tree die-offs in drier forests.

See the full report on what’s in store for the Pacific Northwest here.