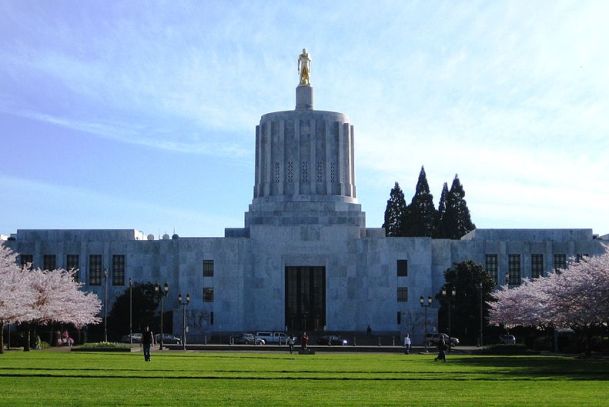 SALEM, Ore. (AP) — Republicans will vote in the coming weeks on a nominee for governor, but the race was really decided last month, when former state party chairman Allen Alley said he wouldn't jump in the race.

That leaves state Rep. Dennis Richardson (left) of Central Point to run against five political newcomers who have very little name recognition, money or traction in the race.

Richardson already has his eye on the November general election, and incumbent Democratic Gov. John Kitzhaber. And while Richardson's the easy favorite in the primary, he's decidedly an underdog in the general election in a state dominated by Democrats.

Richardson hopes Kitzhaber's recent stumbles over Cover Oregon, the state's failed health insurance exchange, will encourage voters to consider a change when they might otherwise just vote for the Democrat.

“I think Cover Oregon is an indication of the failure of leadership of our governor,” Richardson said. “He's good at throwing out big visions and poor in actually ensuring that they become realities.”

There has been little reliable public polling to gauge the impact of the Cover Oregon problems on Kitzhaber's popularity, but he looks to have a much louder megaphone to defend himself and define Richardson in his own way. Kitzhaber has raised $666,000 for his re-election bid just this year, four times as much as Richardson, and still has $536,000 left to spend. Richardson's campaign bank account has $131,000, according to campaign finance records.

By avoiding a fight for the Republican nomination, Richardson also missed out on a chance to get his name out, said Jim Moore, a political science professor and director of the Tom McCall Center for Policy Innovation at Pacific University in Forest Grove.

“A primary is a tremendous opportunity to introduce yourself to a lot of voters,” Moore said. “Voters only pay attention if there's a race.”

Kitzhaber has all but locked up the Democratic nomination, though he faces opposition from a little-known candidate, Ifeanyichukwu Diru of Salem. Kitzhaber says he deserves a fourth and final term because he steered Oregon's budget away from a deep deficit while working to overhaul the state's health care and education systems.

In addition to Cover Oregon, Richardson criticizes Kitzhaber's decision to hire Rudy Crew to oversee his effort to reform the education system. Crew left after only one year, and he was criticized for spending an unusual amount of time traveling outside Oregon. Richardson also faults Kitzhaber for failing to deliver a new Interstate 5 bridge over the Columbia River, although Oregon did pass funding for it — with Richardson's vote — only to watch it fall apart when Washington state refused to follow suit.

Democrats enjoy a sizeable advantage in voter registration in Oregon, and the state hasn't had a Republican governor since Vic Atiyeh left office at the beginning of 1987. The closest Republicans came was four years ago, when retired professional basketball player Chris Dudley fell to Kitzhaber by just 22,000 votes out of nearly 1.5 million cast.

Richardson is a different candidate from Dudley and Ron Saxton, the 2006 Republican nominee. He's more experienced with state politics, though he's never run a statewide campaign, and more conservative, most notably on social issues.

Richardson's conservative voting record could excite his base, but it also gives Democrats a weapon with which to attack him.

Richardson sees his experience in the Legislature as an advantage that distinguishes him from Republican nominees who came before him. Richardson has spent 11 years in the Legislature, where he wielded significant power over the state budget during the 2011 session, when he was the GOP budget chief and Republicans and Democrats were tied in the House.

“If you look back at Oregon's history, we almost always will elect someone who has experience in the Legislature,” Richardson said. “I understand the budgets. I understand how government functions. I understand how to work across the aisle to get things done. Those traits will serve Oregon well, and I believe will make the difference for a majority of Oregon voters.”

Five Republicans will be on the ballot along with Richardson: Tim Carr, Gordon Challstrom, Bruce Cuff, Darren Karr and Mae Rafferty.

Richardson, who has lived in rural southern Oregon since 1979, said he'll move closer to the bulk of voters in June through the election. He plans to get a place downtown “and really experience what it's like to live in urban Portland,” he said.

“I want to see the schools all around Portland. I want to visit the factories. I want to get to know the pulse of the city,” Richardson said. “Because as governor, I need to be the governor of all of Oregon and bridge the urban-rural divide.”