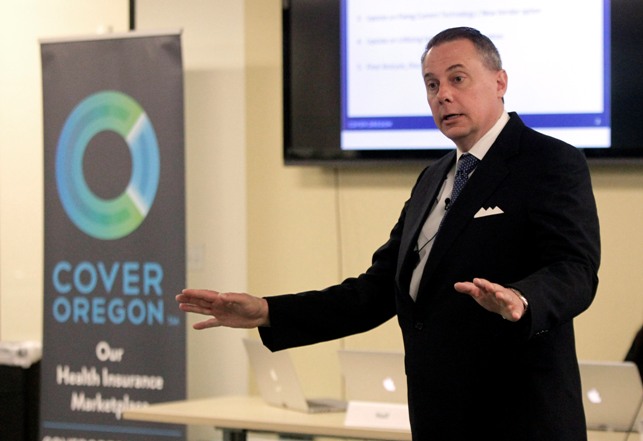 PHOTO: Cover Oregon interim chief information officer Alex Pettit speaks during an advisory committee meeting in Portland, Ore., Thursday, April 24, 2014. After months of deliberation over what to do with Oregon's botched online health exchange, the advisory panel recommended that the state drop its trouble-plagued online health exchange for private policies and have Oregonians instead shop for them on the federal online marketplace. (AP Photo/Don Ryan)

DURHAM, Ore. (AP) — After months of trying to get its problem-plagued online health exchange to work, Oregon on Friday officially gave up on the state portal and decided to switch to the federal website — the first state in the nation to do so.

Cover Oregon's board approved an advisory committee's recommendation to ditch its troubled portal. Oregon will use HealthCare.Gov for private policies.

Officials say fixing the existing system would be too costly at $78 million and would take too long. Switching to the federal system would cost just $4 million to $6 million.

Oregon's exchange is seen as the worst in more than a dozen states that developed their own online health insurance marketplaces. The general public still can't use Cover Oregon's website to sign up for coverage in one sitting.

Instead, Oregonians must use a time-consuming hybrid paper-online process to sign up for insurance — despite $134 million the state paid Oracle Corp. to build the online exchange. Oregon received a monthlong enrollment-deadline extension because of the technology problems.

Several other states experienced major problems with their exchanges, but only one has chosen to replace its site. Maryland recently decided to adopt the technology used on Connecticut's successful exchange.

Federal officials said the federal exchange is able to add more states, and they are working with Oregon on the next steps.

In March, the federal Government Accountability Office announced an investigation of Oregon's exchange, including looking at whether the federal government can reclaim grant money given to Cover Oregon if taxpayer funds were mismanaged.

Separately, former Health and Human Services Secretary Kathleen Sebelius asked for an inspector general's probe into problems with the rollout of the health care law.

An independent investigation ordered by Gov. John Kitzhaber found state managers repeatedly failed to heed reports about technical problems that prevented the Cover Oregon exchange from launching. It also found Oracle did a shoddy job in building the exchange. Five Oregon officials connected to the development of the Cover Oregon portal have resigned.

Kitzhaber has insisted communications about the portal's troubles never reached him as the planned Oct. 1 launch neared. The governor said he agreed with the technology advisory committee's recommendation.

Officials said they will keep the Cover Oregon website, but it will be redesigned to direct people to the federal site. Oregon also will use the federal call center, but it will retain some front-end customer outreach, education efforts and initial carrier management.

Because HealthCare.Gov enrolls people only in private health plans, Oregonians found eligible for Medicaid will be redirected to the Oregon Health Authority, a state agency that can enroll them in the Oregon Health Plan, Oregon's version of Medicaid.

So far, about 242,000 Oregonians have enrolled in coverage through Cover Oregon. About 70,000 of those enrolled in private health plans, while 172,000 enrolled in the Oregon Health Plan.