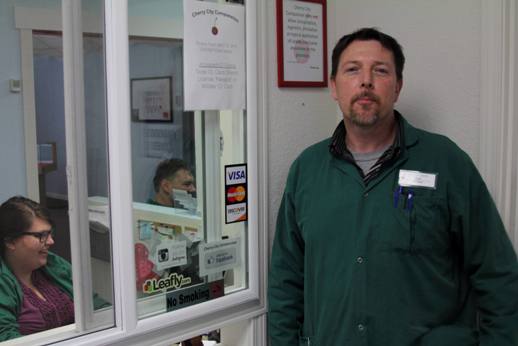 Nole Bullock, the executive director of Cherry City Compassion, a medical marijuana store in Salem, Ore., poses for a photo in his shop on Friday, March 28, 2014. Until now, medical pot shops have operated in a gray area. That's changed under a law passed last year that legalizes medical marijuana dispensaries so long as they apply for and are granted a license. (AP Photo/Chad Garland)

SALEM, Ore. (AP) — Medical marijuana cardholders in some parts of Oregon will have to look harder than they expected for dispensaries as cities and counties throughout the state enact ordinances to keep the pot shops from opening within their borders.

A total of 13 Oregon counties and more than 100 towns and cities have passed moratoriums banning the pot shops since a law allowing the dispensaries took effect March 1. More than 30 other local governments are considering similar measures.

The state's dispensary law was intended to move dispensaries out of a legal gray area. But after a number of communities voiced a desire to keep dispensaries out locally, the Legislature in early March passed a law that would give them until May to adopt moratoriums of up to a year.

The bill took effect days after Oregon had already begun accepting applications from dispensaries seeking state approval of their operations.

More than half of the 340 applications the state has received so far have come from places like Portland and Eugene, where local authorities are not looking to impose moratoriums. But many dispensary owners are still waiting to see if their communities will let them open or stay.

At least six cities have enacted permanent bans or modified other ordinances, such as land use codes, to block the shops from opening.

Medical marijuana cardholders are able to get the drug by growing the allowed amount for themselves, or having an authorized person grow it for them. Many cardholders prefer to obtain the drug from dispensaries because of the selection available.

In Clackamas County, where three dispensaries in unincorporated areas have been approved by the state, patients and owners are awaiting the fate of a proposed moratorium set for a vote Thursday.

If it passes, Mario Mamone says he'll go bankrupt. Mamone owns the Maritime Cafe, which has been operating in an unincorporated part of the county for more than two years. He says he has more than $125,000 invested in the business.

Maritime patient and employee Desirea Duvall said she hopes the board makes an exception for existing dispensaries. If it doesn't, she said she'll lose her job, and she and others will struggle to get the medicine they need.

Some communities have enacted four- or six-month moratoriums to make time for developing rules to restrict the hours, locations and manner of dispensary operations. Others want to wait up to a full year to see how things go with dispensaries in other areas before allowing them in their communities, said Rob Bovett, an attorney for the Association of Oregon Counties and former district attorney who lobbied for the Legislature to allow local governments to bar the pot stores in their communities.

The first state-approved dispensary in Linn County is hoping to work out an exemption that would allow it to stay open after county commissioners passed a moratorium last week that takes effect May 1.

It's a last-ditch effort, said Going Green Compassion's Sarah Whiteley, who noted that she and her husband have invested more than $70,000 into the facility. Whiteley called the county's decision "heartbreaking."

Linn County Commissioner Roger Nyquist said he voted for the moratorium because of a "lack of clarity" about the state's dispensary program. He felt the board had to act by May 1, or "we lost all ability to shape this thing at a local level."

Nyquist said the board was advised that an exemption for Going Green would not be possible under the law.