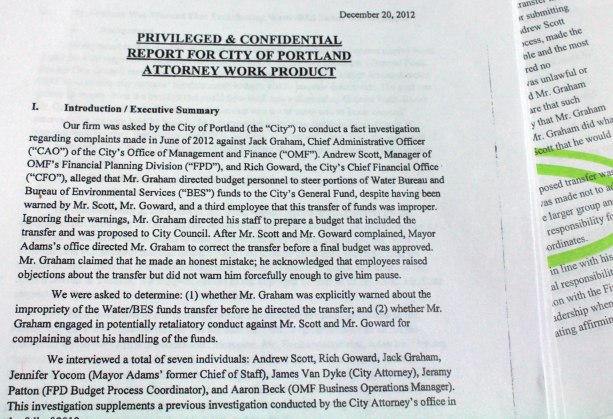 An attorney was asked to investigate not whether Graham's proposed funds transfer was legitimate, but whether he was "warned" about improprieties in the schools fund money transfer and whether he “engaged in potentially retaliatory conduct against Mr. Scott and Mr. Gower for complaining about his handling of the funds,” according to the first page of the report; Graham and his legal team says he was presumed guilty at the outset.

Former City of  Portland Chief Administrative Officer Jack Graham this week filed a tort claim alleging that racial discrimination drove him out of his job at the Office of Management and Finance, where he was the top-ranked African American administrator  in city government.

The notice of intent to sue the city also charges that officials denied him the right to due process in answering allegations against him; and that Commissioners Amanda Fritz, Steve Novick and Nick Fish publicly defamed his character when they spoke of his situation to newspaper reporters.

According to the legal documents delivered to city officials yesterday by Graham’s attorney, Dana L. Sullivan, Graham was subject to a higher degree of scrutiny in his actions than others in his position have been.

“City employees and managers questioned his qualifications because of his race and repeatedly complained about Mr. Graham’s decision to make diversity hiring a priority in OMF.

“Mr. Graham also faced an effort, motivated in part by his race, to remove the City’s budget operations from his purview and establish an independent Budget Office,” the tort claim says. “Mr. Graham complained that he was being subjected to discrimination based upon his race, but the City ignored his concerns.”

Graham last month was granted a name-clearing hearing to allow him to give his side on what really happened when he was accused of fiscal mismanagement in 2012 – but, his attorney says, city officials would not allow any of his supporters to participate nor would they allow City Human Resources Director Anna Kanwit to testify on her own investigation into the case.

Graham testified at the name-clearing that he’d been tasked by former Mayor Sam Adams to help find financial resources that could be used to support Portland Public Schools operations, which were in severe deficit that year.

Graham says he asked his top management staff – the Office of Management and Finance’s Financial Planning Division Manager Andrew Scott and Chief Financial Officer Richard Goward – whether it could be possible to redirect reserve funds from the Water and Bureau of Environmental Services budgets for that purpose.

Ultimately nothing happened with the funds, which Graham argues were “unrestricted reserve funds” used for such purposes; his attorney charges that the fund transfer Graham suggested was openly debated as part of the city’s budget process and ultimately taken off the table.

However Goward and Scott allege that Graham “tried” to pursue the funds transfer, which – also an important part of the lawsuit – is just like an even bigger transfer that Scott did the year before without censure or public comment, thus creating the appearance of a double-standard in accountability, according to Kanwit’s investigation.

A key part of Graham’s tort claim involves a report on his activities commissioned through the City Attorney’s office, a copy of which has been obtained by The Skanner News.

It was prepared in 2012 by Yael Livny, a lawyer for Jackson Lewis law firm, who was asked to investigate whether Graham was warned about improprieties in the schools fund money transfer and whether he “engaged in potentially retaliatory conduct against Mr. Scott and Mr. Gower for complaining about his handling of the funds,” according to the first page of the report.

Graham’s tort claim argues the investigator was never asked to determine whether the transfer proposal was itself legitimate, but rather was directed to assume he was guilty of wrongdoing; Graham says the investigator herself did not understand the terminology or processes she was examining.

A number of comments made by Scott and Gower regarding what they say Graham said to them appear to be repeated in Livny’s report without additional proof or corroboration.

“This investigator found it significant that Mr. Van Dyke reported that Mr. Scott and Mr. Goward appeared very credible to him when they first reported the conversations – e.g. they were upset and very troubled when they recalled the events,” Livny writes. “Mr. Van Dyke recalled thinking that if Mr. Graham truly thought Mr. Scott and Mr. Goward were lying, a more natural response would have been anger, not commendation.

Ultimately, Livny’s report discounts Graham’s stated concern that he was being made a victim of racial harassment at the hands of white administrators.

City of Portland’s Human Resources Director Anna Kanwit did her own investigation in late 2013, issuing a confidential memo to current Mayor Charlie Hales finding that Smith – with the certain knowledge of Gower -- did an even bigger funds transfer in May of 2011, moving more than $500,000 from the Facilities reserve fund into the General Fund to pay part of the cost of the Portland Police Bureau’s new training facility at the Kelly Building.

It’s unclear whether Graham’s predecessor, former Chief Administrative Officer Ken Rust, spoke out against or knew about that transfer at the time.

Kanwit’s memo, obtained by The Skanner News, shows she is critical of Livny’s efforts in the case.

“Her report states that Graham attempted to transfer Water/BES funds to the general fund,” Kanwit’s report says. “This is an inaccurate statement of what occurred as Graham does not have access to those bureaus’ budgets.”

Later in her report, Kanwit writes, “While there may be an explanation, based on the facts found to date the two events appear identical except that in 2012 the transfer never actually occurred.”

Goward left his position last year because, he said publicly, he suffered retaliation for being a “whistleblower” in the Graham case. He reportedly left office with a payout of more than $160,000 and an agreement he would not sue the city.

Kanwit’s report ends with a suggestion for further review of the case – and a suggestion that she should herself be included in the probe.

“Rust and Goward are retired but I recommend interviewing Scott regarding the 2011 action,” she writes. “The mayor or his designee should conduct the interview with the [Bureau of Human Resources] Director present.”