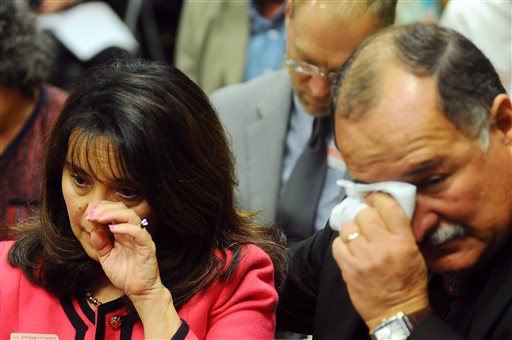 PHOTO: Renetta Torres, left, and her husband Stephen, right, shed tears during the Department of Justice Press Conference on the Albuquerque Police Department's use of deadly force, Thursday April 10, 2014. The Torres 's son Christopher was fatally shot in April 2011 by officers servicing a warrant at the family's home. APD officers have killed 23 people since 2010. (AP Photo/Albuquerque Journal, Adolphe Pierre-Louis)

ALBUQUERQUE, N.M. (AP) — A scathing report by the U.S. Justice Department released Thursday revealed a troubling pattern of excessive force by the Albuquerque Police Department and recommended that New Mexico's largest city become the latest municipality to adopt reforms aimed at cleaning up its police force.

The report, which immediately drew support from Albuquerque Mayor Richard Berry and other city officials, came after federal officials spent months conducting interviews, scouring videos and reviewing hundreds of pages of documents. According to the report, Albuquerque officers too frequently used deadly force on people who posed a minimal threat and used a higher level of force too often on those with mental illness, often violating their constitutional rights.

Albuquerque joins a list of cities targeted by the Justice Department over allegations of brutality and violations of constitutional rights by police officers. Portland and New Orleans, for example, are among those that have been investigated amid similar complaints.

In Albuquerque, federal investigators focused on 37 shootings — 23 of them fatal — by officers since 2010. By comparison, police in the similarly sized cities of Denver and Oakland have been involved in fatal and non-fatal shootings totaling 27 and 23, respectively.

Federal investigators found the majority of those Albuquerque shootings were unreasonable and violated constitutional rights. They also uncovered a significant number of instances in which officers used less lethal measures such as Tasers in an unconstitutional manner.

"Based on our investigation, we have reasonable cause to believe that APD engages in a pattern or practice of use of excessive force, including deadly force, in violation of the Fourth Amendment," Jocelyn Samuels, the acting assistant attorney general of the Justice Department's civil rights division, wrote in a letter to Berry. "We have determined that structural and systemic deficiencies — including insufficient oversight, inadequate training, and ineffective policies — contribute to the use of unreasonable force."

The Justice Department recommended that Albuquerque make changes to its use of force policy to, among other things, place more emphasis on techniques for de-escalating potentially violent situations.

Samuels said the investigation was thorough and that it became clear the problems within the police department were systemic.

"The reforms we are proposing ... are going to result in the kinds of structures that will over time create a change in the culture," she said. "It starts with commitment from the top."

She acknowledged that changes will not happen overnight.

The findings served as validation for critics who have long complained that a culture of aggression has permeated the Albuquerque Police Department. However, some community members voiced concerns after Thursday's announcement that recommendations have been made in the past with city leaders failing to take action.

Berry said the city stands ready to work with the Justice Department to make needed changes.

It could take weeks to hammer out the final blueprint for overhauling the Police Department, but Berry said he fully expects that a federal monitor will be assigned to the city.

"It won't be quick and easy, but we can achieve it," he said of the goals laid out by the Justice Department report.

If a federal monitor is appointed, and the city agrees on terms, Albuquerque would join cities such as Detroit, Los Angeles, New Orleans and Seattle that have been subjected to federal oversight.

Scrutiny of the Albuquerque force is one of 15 investigations of police departments launched during President Barack Obama's first term.

In 2010, New Orleans Mayor Mitch Landrieu asked the Justice Department to conduct an investigation into allegations of constitutional violations, corruption and discriminatory policies in the city's police department. The federal agency proposed a consent decree — a legally binding document in which a city promises to adhere to and maintain whatever reforms the Justice Department orders.

The cost of instituting the city's consent decree was estimated at about $55 million over five years.

In 2012, federal officials found Portland, Ore., police engaged in a pattern of excessive force against people with mental illnesses. Federal investigators and the city reached a settlement calling for changes to police policies on use of force, stun guns, training, discipline and oversight. It also called for restructuring police crisis intervention training and faster internal inquiries into cases of police misconduct.

The Portland reforms were estimated to cost $3 million to $5 million a year.

A federal judge is expected to make a final ruling in the case April 14.

The Violent Crime Control and Law Enforcement Act of 1994 gives the Justice Department the authority to file a civil suit against law enforcement agencies that engage in a pattern or practice of misconduct. The law was enacted after Los Angeles police officers beat motorist Rodney King in 1991.

The Justice Department also can sue law enforcement agencies if they engage in discrimination and receive federal funds.

Samuels did not offer a timetable for negotiations with Albuquerque, but said the agency would remain engaged for "as long as is necessary."

Last week, Berry asked the federal agency to expedite its review and help overhaul the police force. His request followed a violent protest last month in response to the shooting death of a homeless man who had threatened to kill officers. The man was gathering his belongings and turning away when officers opened fire, helmet camera video showed.

The Justice Department recommendations also call for a more objective and rigorous internal accountability system that includes reviews and investigations when force is used.

Also, officers would be required to participate in crisis intervention training and higher eligibility standards would be set for supervisors and staff assigned to tactical units.

Samuels also noted that the department's "broken" civilian oversight process would need to be fixed.

Until Thursday's announcement, federal officials released few details of the Albuquerque investigation but conducted hundreds of interviews with officials and residents.

Jewel Hall, a retired teacher and president of the Martin Luther King Jr. Memorial Center Board, participated in many of the meetings. She said she was hopeful the department would adopt some of the recommendations. Her group said the Justice Department recommendations didn't go far enough and called for a "full-fledged monitor" of Albuquerque police.

Still, she said the community "needs to be involved and their input needs to be respected."

"The coming days and months will determine the next generation of what policing will look like in our city," he said. "We are at a unique time and place where the city can decisively determine the culture of the Albuquerque Police Department and its relationship with the community."

In a statement, the Albuquerque Police Officers' Association said the union appreciated the changes recommended by the Justice Department. "We as an association are committed to assisting all of our officers' in this (department) in addressing issues of concern that have been raised and helping them move forward in a positive fashion that is fair to all."