Monica Foster of The Skanner
Published: 16 May 2007 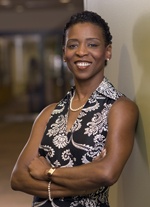 Local Microsoft employee Felicia Guity was recently honored by EBONY magazine at the eighth annual EBONY Outstanding Women in Marketing and Communications Awards Luncheon.
EBONY President and CEO Linda Johnson Rice hosted the event May 3 in New York City, and about 1,000 people attended the red carpet event.
Guity travels the world for Microsoft and was in Germany working when she heard she would be honored.
"I was speechless, I was just sort of paralyzed for the first 24 hours," Guity said. "EBONY thinks I'm worthy of an honor in marketing. I'm humbled and honored to be recognized in this way."
The Seattle woman said the experience was "one of the most enriching" moments of her life.
"The women I was with were truly inspiring," Guity said. "It was the first time in my life where I experienced true sisterhood and support that made me feel that I'm invincible These people who may have started with humble beginnings but are people who in their own right have found their niche in the world and are contributing in profound ways."
Guity was joined by a prominent list of individuals honored including Donna Brazile, Democratic political strategist, weekly contributor and political commentator for CNN, ABC News, NPR and chair of the Democratic National Committee's Voting Rights Institute; Michelle Obama, vice president for Community and External Affairs for the University of Chicago Hospitals and wife of presidential candidate Sen. Barack Obama, D-Ill.; Yvette Lee Browser, the first and youngest African America woman to create and run her own television series, and executive producer of the UPN series "Half and Half;" Gwen Ifill, moderator and managing editor of "Washington Week" and senior correspondent for "The NewsHour with Jim Lehrer;" and several others.
Presenters at the awards ceremony included Raven-Symone, award-winning singer and actress on The Disney Channel's show "That's So Raven;" actress Holly Robinson-Peete; critically acclaimed author Michael Eric Dyson; actress Phylicia Rashad; and Jonathan Rodgers of TV One.
Guity joined Microsoft in 2003 and is responsible for the company's global sales and marketing with OEM Platform Partners and working with companies like Intel.
"You really have to be aware of how you think and process information. Critical thinking in the marketing area and having vision is very important," Guity said.
Prior to joining Microsoft, Guity worked at Lawson for three years where she served as vice president of mergers and acquisitions and as vice president of strategic alliances. From 1991 to 1998, Guity was employed at Lotus, an IBM company, where she served in various positions including sales, operations, customer support, strategic planning, marketing, process reengineering and customer support.
The Michigan native relocated to Seattle from Minneapolis, Minn. in 2004 and lives with her two children in Seattle. She serves on the boards of Hopelink and the Seattle Opera, is a Menttium Mentor, participates in a number of community volunteer activities and is working on earning her doctorate degree in business administration.