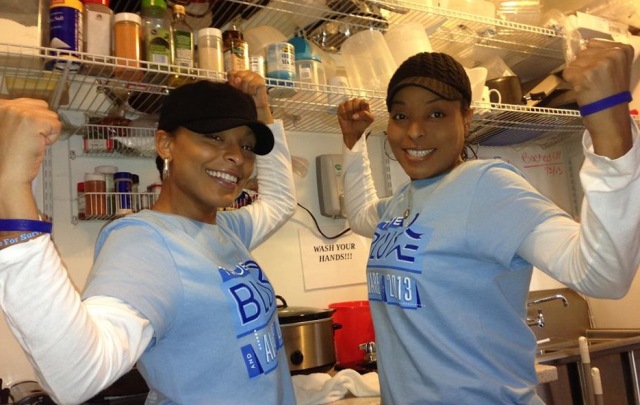 Michell and Marsha Baker, longtime vegan soul food food caterers, in their former food cart, The Hope Kitchen. Their sister, LaRisha Baker (not pictured) is a past winner of the Multnomah County Public Health Genius Award for her work in preventing colon cancer as a supervisor in the county Health Department.

EDITOR’S NOTE: The National March Against Colorectal Cancer in Portland comes to Pioneer Courthouse Square April 12, from 11 a.m. to 4 p.m.

Sponsored by the Steve Baker Colorectal Cancer Alliance and One Million Strong, the event brings colon and rectal cancer screenings and education to Portland.

At the time of my father’s diagnosis, I was living in beautiful sunny San Diego, Calif., without a care in the world. Life was good, so I thought.

In July of 2007, we found out our strong, sensitive, humble father had colon cancer. Just hearing the word cancer was a huge blow to the stomach, and then days later finding out that it was stage IV cancer was a complete body blow.

In August, I flew home to Portland, OR for my daddy’s surgery. It removed a portion of his colon and some lesions on his liver.  The waiting room was full of family and friends to keep us company as our dad went through a seven-hour surgery. I remember the surgeon coming out to tell my family that the surgery had went better than expected, and they were actually able to remove more liver lesions than expected. The whole room let out a HUGE gasp of air and burst into tears of relief, but we knew this was a fight that had just begun and we were ready to take on whatever came our way.

A few days later, Daddy came home to recover from surgery and my sister and I prepared to fly back home to San Diego. When I hugged my daddy goodbye, it was hard for me to let go and the “ugly” cry began. I didn’t want to leave, I didn’t want to say goodbye; I wanted to stay in his presence forever. So after returning to San Diego, CA, a decision was made quickly. Yep, I packed my things along with my sister Marsha, and by October 12, we were headed back to the Pacific Northwest.

My dad did pretty well while going through chemo; he was still going to work on his off-chemo weeks, still doing yard work, still cooking and cleaning, and he never lost a strand of hair! About eight months later, we all noticed that Daddy’s voice began to change and he was having trouble breathing. He went to see his oncologist to discuss this issue and came home on oxygen. I think at that point we all got a little nervous about our dad’s condition, but no one uttered a word.

About a month later, our dad was admitted to the hospital for what they thought was a pulmonary embolism (blood clot). About a week later, he was still having difficulty breathing and he was admitted into the hospital once again. After multiple tests and scans, the doctors came into the room to let us know that the cancer had spread to his lungs, he would not recover and we should call our friends and family. Within the hour the hospital room was full of friends and family, so many people who loved my dad came to pay their respects. The hospital had to move us to a bigger room to accommodate the mass of people coming to visit him.

While my dad was in the hospital, my mom, sisters and I would trade off nights staying with him; this particular night was my turn to go home and rest. That night I remember sitting in my parent’s living room in disbelief that my dad was dying, and that this was my family’s reality. I remember feeling so angry that we didn’t know that there was a test and screening that could have prevented this very moment. I remember shouting out to my sister, “This isn’t fair, how come more people aren’t talking about this?!” It was hard to grasp the idea that my dad would no longer be around for holidays, birthdays, my wedding day and the hardest one of them all – my children would never know their grandfather. I was hurt, sad, and VERY angry! At that very moment I knew we had to be a voice for our dad who would no longer be here to speak for himself.

After laying our father to rest, the days and weeks that followed seemed unbearable; I couldn’t stop crying and feeling absolutely lost. I didn’t know how to move on, live life and be happy. The sadness had set in and you could see it in my eyes. I didn’t want to be around anyone who didn’t understand what I was feeling, so darkness and wine soon became my best friends.

Although sadness was the overall emotion, as time went on I began to feel extremely ANGRY! I didn’t understand why we didn’t know more about preventing colorectal cancer. If this cancer is preventable, why aren’t people shouting this from the rooftops??

So, my sisters and I began searching online for organizations that focused on raising awareness about colorectal cancer. There was absolutely nothing in our own community, but we soon found this great organization called C3: Colorectal Cancer Coalition, now known as Fight Colorectal Cancer.

That following March, my sisters and I nervously traveled to Washington, D.C. for Fight Colorectal Cancer’s 3-day event, “Call-on Congress”.  As we walked into the conference room to begin our first day of advocacy training, I remember being so nervous and then we saw this cute little blonde lady with multiple pairs of glasses sitting on her head smiling at us. It was Nancy Roach, the founder of Fight Colorectal Cancer and also, a fellow Oregonian.

The staff was absolutely great; they made us feel comfortable and were very sensitive to the fact that we had just lost our dad.  Advocacy was brand new to my sisters and me, but the information we received made us feel like WE could do it. I remember Congressman Jim Moran talking to us and one thing he said still sticks out, “Congress works for you, and if constituents didn’t bring up issues then we wouldn’t have any work to do.” I had never in my life looked at Congress this way. The training we received was absolutely phenomenal, the staff gave us a complete overview of what colorectal cancer is and why it’s so preventable. We also received a rundown of how a bill becomes a law.

By the end of the day, we were so nervous for the following day my sisters and I stayed up all night going over the legislative goals and who would say what. The next morning we woke up and reluctantly put on our “Cover Your Butt” t-shirts (which turned out to be a great attention-getter and conversation starter) and trotted off to Capitol Hill with the best mentor anyone could ask for, Nancy Roach.

As we sat in our first meeting and explained to the aid why we were there, the tears began to flow and we tried our hardest to get through the meeting. As we walked out of the office, we all let out a huge deep breath and went on to the next meeting.

Although the day was extremely emotional for us, by our last meeting the tears had dried up a little and we couldn’t stop saying our dad’s name. Without knowing it, we were letting people get to know our dad “Steve Baker,” one meeting at a time. We wanted them to understand how much his death affected our family and if it could happen to our family, it could happen to theirs. I remember leaving the Hill that day feeling so proud that my father was STEVE BAKER and that I was able to share this moment with my sisters, LaRisha and Marsha.

From that moment, we were determined to go back home and make an impact in our community.

Soon after we returned to Oregon, we met with other nonprofits and friends to see how we could start our own local nonprofit organization. We were amazed by how many people wanted to help us, and for FREE, which is a golden word in the nonprofit world! In July of 2009, the Steve Baker Colorectal Cancer Alliance (SBCCA) was founded and our journey began.

We started off very small. We talked to our friends and family about getting screened. We participated in local community events with small booths giving out colorectal cancer information, told our story at churches, partnered with other local nonprofit organizations, and pretty much talked to anyone who would listen.

Soon we began to make a name for ourselves in our local community. We started applying for small grants, and after many “No thank you”  letters, we finally received our first grant! With this grant, we hosted a small community dinner for about 50 people. We discussed cultural competency within the medical world and how it relates directly to colorectal cancer. From then on, it seemed as if doors just began to open for us. People who once told us “No” were now calling us to partner with SBCCA! It felt amazing, and I knew our dad was PROUD of his girls!

I really don’t know where I would be today had my sisters and I never taken that very first trip to D.C. My involvement with advocacy and Call-on Congress has given me a voice I never knew I had. It has taught me that when you truly believe in something you have to take action and create change.

So how does advocacy help me carry on the memory of my father? Through advocacy I am able to talk about my dad everywhere I go.  And hopefully by telling my family’s story to others, we have saved a life… or two… or three.

Encourage your loved ones to get screened!

GET ACTIVE, GET SCREENED

The National March Against Colorectal Cancer in Portland Comes to Pioneer Courthouse Square April 12, from 11 a.m. to 4 p.m.

Sponsored by the Steve Baker Colorectal Cancer Alliance and One Million Strong, the event brings colon and rectal cancer screenings and education to Portland.

The Steve Baker Colorectal Cancer Alliance (SBCCA) is a Portland-based nonprofit founded by three sisters who lost their father to colon cancer in the summer of 2008. One Million Strong is a coast-to-coast national march event to raise awareness about colorectal cancer.

According to the Oregon Health Authority, colorectal cancer is the second most deadly form of cancer, but also one of the most preventable. Only 64 percent of Oregonians report being screened (2012), but three of five colorectal cancers are found at late stages when it’s more difficult to treat and cure. In 2010, 645 Oregonians died from colorectal cancer.

For more information about One Million Strong, the Portland colorectal cancer awareness march and the SBCCA, click here.