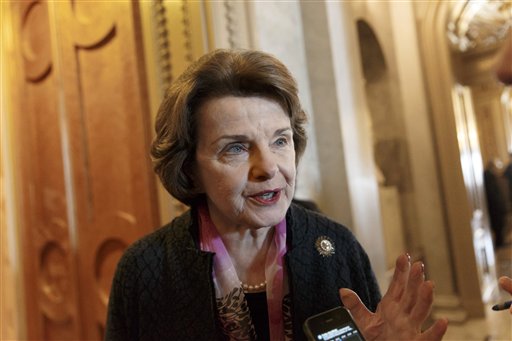 Sen. Ron Wyden (D-Ore.) has come to the defense of Sen. Dianne Feinstein (D-Calif.) as the fight over Congressional oversight of America’s spy agencies gets uglier.

On Sunday, former CIA chief Michael Hayden slammed a five-year investigation into U.S. terror interrogations. Hayden said the Senate Intelligence Committee report on the investigation is not objective. And he accused Feinstein, who chairs the committee, of being too “emotional.”

The Bush-era CIA comes under fire in the report for the brutality of its terror investigations.

Wyden, one of the most outspoken members of the committee, issued a statement defending Feinstein.

“General Hayden’s suggestion that Chairman Feinstein was motivated by ‘emotion’ rather than a focus on the facts is simply outrageous,” he said.

“Over the past five years I watched Chairman Feinstein manage this investigation in an extremely thorough and professional manner, and the result is an extraordinarily detailed report based on millions of pages of internal CIA records, including operational cables, internal memos, and interview transcripts.

"General Hayden unfortunately has a long history of misleading the American public – he did it on domestic surveillance when he was the head of the NSA, and he did it on torture when he was the CIA Director.  The best way to correct this culture of misinformation is to give the American people a chance to review the facts for themselves, and I’ll be working with my colleagues and the administration to ensure that happens quickly.”

Along with Sen. Mark Udall (D-Utah), Wyden is one of the few members of Congress who have campaigned against NSA surveillance of Americans, drone strikes on American citizens abroad, and the Bush-era CIA interrogation techniques that were widely condemned as akin to torture.

Relationships between the Senate Intelligence Committee and the agencies it is supposed to oversee have worsened as senators voted last week to release a summary of its report on terror interrogations and waterboarding.

The disagreements led to allegations of CIA misconduct and a Department of Justice investigation.

On March 11 Feinstein held a press conference where she accused the CIA of:

Minimizing the brutality of the interrogations

Attempting to intimidate the committee

“Besides the constitutional implications, the CIA search may also have violated the Fourth Amendment, the Computer Fraud and Abuse Act, as well as Executive Order 12333, which prohibits the CIA from conducting domestic searches or surveillance,” Feinstein said.

“Days after the meeting with Director Brennan, the CIA inspector general, David Buckley, learned of the CIA's search and began an investigation into CIA's activities. I have been informed that Mr. Buckley has referred the matter to the Department of Justice, given the possibility of a criminal violation by CIA personnel.”

The acting CIA general counsel went on to file a report with the Department of Justice claiming that intelligence committee staff broke the law.

Unlike Sens. Wyden and Udall, Feinstein has formerly been viewed as a moderate who has refused to challenge NSA spying on US citizens.

Soon after, Feinstein said, the CIA filed a complaint with the Department of Justice, claiming criminal behavior by intelligence committee staff.

“I view the acting counsel general's referral as a potential effort to intimidate this staff,” Feinstein said.

“I should note that for most if not all of the CIA's detention and interrogation program, the now-acting general counsel was a lawyer in the CIA's counterterrorism center, the unit within which the CIA managed and carried out this program. From mid-2004 until the official termination of the detention and interrogation program in January 2009, he was the unit's chief lawyer. He is mentioned by name more than 1,600 times in our study.

CIA chiefs and the White House have been reluctant to declassify the report saying they disagree with its conclusions. The report found the controversial interrogations had been no help in America’s search for Osama bin Laden or in preventing terror attacks.

Feinstein said the report should be declassified so that the brutal interrogations described in it can never again become U.S. policy.