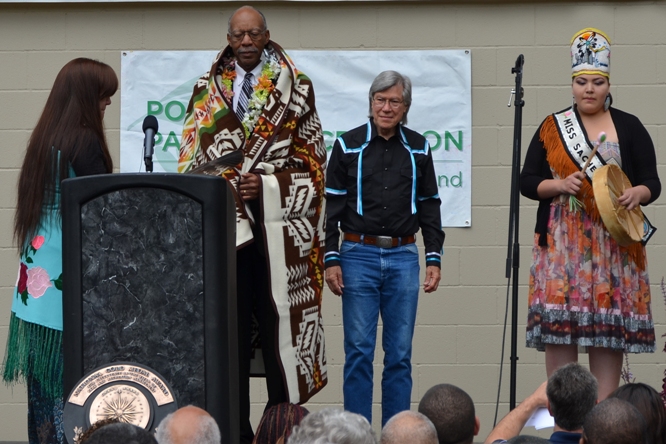 PHOTOS:Available on The Skanner's Flickr photo gallery (top right). Music by Marvin Gaye: Mercy, Mercy Me, The Ecology. Jordan was an environmentalist so we dedicate this song to his memory.

Beloved former Portland Parks & Recreation Director and City Commissioner Charles Jordan passed away in his home last week after a long illness.  Born Sept 1, 1937 in Longview, Texas, Jordan grew up on a reservation close to Palm Springs, Calif. His experiences there shaped his life as he went on to claim the outdoors for people of all colors.

Head and shoulders above the crowd in many ways, Jordan was Portland's first African American City Commissioner and a visionary Parks director in Portland and in Austin Texas. Appointed by President Reagan to a Commssion on the great Outdoors, Jordan continued to have a national impact after his retirement as chair of The Conservation Fund.

As a youth Jordan won a basketball scholarship to Gonzaga University, where he studied Philosophy, Education and Sociology. He went on to further studies in Education and Public Administration at the University of Southern California.

He worked as a gardener in Palm Springs before being hired into its Parks and Recreation department. It was the beginning of a storied rise to leadership in parks, conservation and equity of access to the outdoors for all Americans.

Portland Parks and Recreation held a special commemoration of his life last Saturday at the third annual New Columbia Community Health Fair, an event he would have loved.

That's my Dad from Dionjordan on Vimeo.

Charles Jordan was a pioneer for Portland Parks & Recreation, and implemented lasting and landmark programs for all Portlanders.  Jordan’s legacy has and continues to enhance the lives of current and future generations.  Just a few hallmarks of Jordan’s tenure include popular PP&R programs such as the free annual series of Movies in the Park, plus innumerable youth initiatives. Jordan gained public support for critical parks bond and levy measures. He oversaw 44 new Portland parks and natural areas during his tenure.  Charles Jordan’s leadership, commitment to Portland, and innovative policies are anchors of Portland Parks & Recreation’s mission and philosophy now and going forward.

“Charles Jordan is established in history as one of the heroes of Portland,” says Portland Parks Commissioner Amanda Fritz.  “His many contributions to our community live on, and his memory will inspire others to reach beyond ordinary goals to achieve greatness.  “Charles Jordan epitomized the best in community-building leadership in Portland.”

“Charles Jordan was one of my heroes,” says City Commissioner Nick Fish, a former Parks Commissioner. “One of the greatest moments in my public service was honoring Charles at the dedication of the Charles Jordan Community Center in the Portsmouth neighborhood. He was a national leader in the parks movement. Today is a sad day for the Portland Parks & Recreation family.”

Portland Mayor Charlie Hales has ordered all City flags to fly at half-mast from today through Saturday, April 12.

“As Portland’s first African-American City Commissioner and Portland Parks & Recreation Director, Charles was the champion for much of what we love about Portland's parks,” says Mayor Hales.  “Charles Jordan was most of all about access to parks and recreation programs for everyone.  He was passionate about that principle, and the rest of us caught the inspiration from him.”

“Charles Jordan inspired us all,” says Portland Parks Director Mike Abbaté. “His energy and positive attitude were contagious; he drew people to him and motivated people to help themselves, and their community.  At Portland Parks & Recreation, Charles transformed us from a bureau to a family.  We continue that tradition even today among all “Parkies”.  His loss leaves a hole in our hearts, but Charles’ legacy lives on.”

Jordan’s memorial service will be private, for family only.

“There never has, and there never will be, someone more deserving of this honor,” said Portland City Commissioner Nick Fish at the time. “He was the person who took Portland Parks & Recreation to the next level. Charles Jordan is a champion for the environment and conservation nationwide. His commitment to children, families, and to building community is extraordinary.”

The renamed Charles Jordan Community Center – a building made possible by his efforts – was dedicated on Sunday, July 22, 2012 with a free public celebration.

After spending his early life in rural Texas, Jordan served as an officer in the U.S. Army. He received his B.S. from Gonzaga University in Education, Sociology, and Philosophy. In 2001, he was awarded an honorary Doctorate of Law degree by the University of Vermont.

As City Commissioner, Charles Jordan was noted for his innovative and unconventional approaches to problem solving. He developed the Community Juvenile Officer Program that put Portland Police officers in local schools to engage youth through positive interaction and activities. As Fire Commissioner, he developed an outreach training program to recruit people of color to the Fire Bureau.

On the national stage, Charles Jordan broadened the agenda of the environmental movement and land conservation to make it more inclusive. He is known for his groundbreaking approach to putting people – particularly people of color – at the heart of the American Conservation Movement.

“His great saying was ‘Parks are more than just fun and games,’” says Michelle Harper, who worked with Jordan for years in several capacities. “He is a spiritual person with a strong connection to his church, and he saw us all as being connected. Portland’s parks were where we could come together to build community and family.” 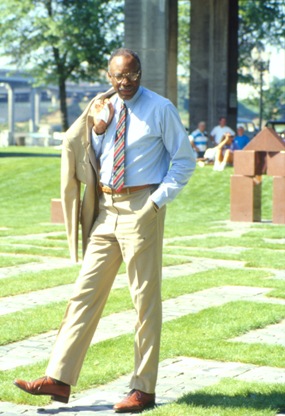 “Today you follow, but tomorrow you will be expected to lead.”

“Dreams are simply goals with wings.”

“Don’t let anyone steal your joy.”

“Take good care of yourself and you can care for others.”

“Develop a passion for something and do it well.”

“Model the way – you never know who is watching and wanting to be just like you.”