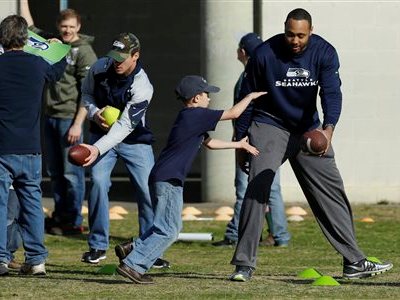 Seattle Seahawks linebacker K.J. Wright, right, and Bryan Walters, third from right, hand off footballs to kids Monday, March 31, 2014, at a community gathering in Darrington, Wash. The NFL football players and other team officials visited Darrington to lend support to the town, which is located near the site of the deadly mudslide that hit the community of Oso,Wash. on March 22, 2014. (AP Photo/Ted S. Warren)

In seeking additional federal help following one of the deadliest landslides in U.S. history, Inslee said about 30 families need assistance with housing, along with personal and household goods. The estimated losses include nearly $7 million in structures and more than $3 million in their contents, Inslee's letter said.

Twenty people are still listed as missing following the March 22 slide that destroyed a rural mountainside community northeast of Seattle. That's down from the 30 people officials previously considered missing.

"There's been an exhaustive effort by the detectives to narrow the list down to one that they feel comfortable releasing," Haakenson said.

"These are 22 people whose loved ones are grieving," he said. "We want to do all we can to find them and put some closure in place for their families."

He said there could be some overlap between the list of missing and the handful of victims who have not been positively identified by the medical examiner.

Steve Harris, a division supervisor for the search effort, said Monday that search teams have been learning more about the force of the slide, helping them better locate victims in a debris field that is 70 feet deep in places.

"There's a tremendous amount of force and energy behind this," Harris said of the slide.

He also is asking for access to disaster housing, disaster grants, disaster-related unemployment insurance and crisis counseling programs for those in Snohomish County and for the Stillaguamish, Sauk-Suiattle and Tulalip Indian tribes.

Players said they signed autographs, tossed footballs and kicked soccer balls in an effort to bring some smiles to an area hit by tragedy.

"To be able to offer a little bit of a release or a distraction from what's going on, I mean that's all you can do," Seahawks linebacker Malcolm Smith said.

One child, 10-year-old Jacob Spelman, wore an autographed bright green hat commemorating the Seahawks' Super Bowl victory as he spoke to reporters after the visit.

"I just feel like they care and that they would like it if we felt better and they came to help us," he said.