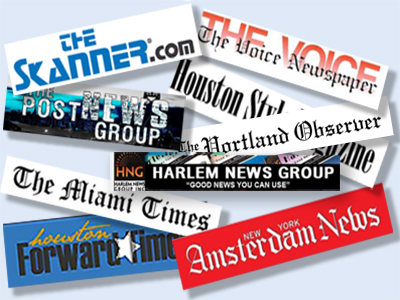 The nation's 250 Black publishers will head to Portland this summer for the National Newspaper Publishers Association 2014 convention.

In past years the convention has visited Atlanta, Ga., New York, Nashville, Tenn., Chicago and Seattle.  This year for the first time the convention will be hosted in Oregon.

“The Portland Observer and I are very fortunate to host this distinguished group,” said Bernie Foster, The Skanner News’ publisher and former vice chair of the NNPA Foundation’s board. “We have members coming from all over the United States and even from Toronto, Canada and the Caribbean.”

The convention, which runs from June 25—28, will be lodged at The Nines Hotel, in downtown Portland. Mayor Hales and other local leaders will welcome the group to Portland. The gathering will include a prayer breakfast, workshops  and an awards gala, as well as opportunities for networking, sightseeing and shopping in Northeast Portland and around the city.

“I am very excited for the NNPA to be coming to the Northwest,” said Portland Observer Publisher Mark Washington.

“I think it is going to be a real extravagant event.   I just wish my brother, the late publisher of the Portland Observer, Charles Washington, was here to see it.  We talked about it for years, how it would be great if it could be hosted here in Portland, Oregon…I have always had respect for Mr. Foster and I know The Skanner and The Portland Observer and will welcome the NNPA to Portland with open arms.”

With hundreds of newspapers reaching a combined audience of some 15 million people, the NNPA continues to play a crucial role in civil rights and economic empowerment for Black Americans.

Historically, Black publishers have played a powerful role in American politics and culture, since the first African American newspaper, Freedom’s Journal, was published in 1827. Its editors were Rev. Samuel Cornish and John B. Russwurm, who famously said,

“Too long have others spoken for us … We wish to plead our own cause.”

The association was founded in 1941 when John Sengstacke of the Chicago Defender invited publishers to a meeting aimed at “harmonizing our energies in a common purpose for the benefit of Negro journalism.”

Some of the most influential journalists in the history of the American Press have worked for Black newspapers. Among them:  Frederick Douglass, W.E.B. DuBois, Ida B. Wells Barnett, Langston Hughes, Romare Bearden, James Weldon Johnson, Mary McLeod Bethune and Daisy Bates.

The Black Press gallery, which features publishers who have made significant contributions to Black journalism, is housed at Howard University, and the Black Press archives are stored at the Moorland-Spingarn Research Center, also at Howard.