Jen Marlowe Author of "I am Troy Davis" to Tour Northwest 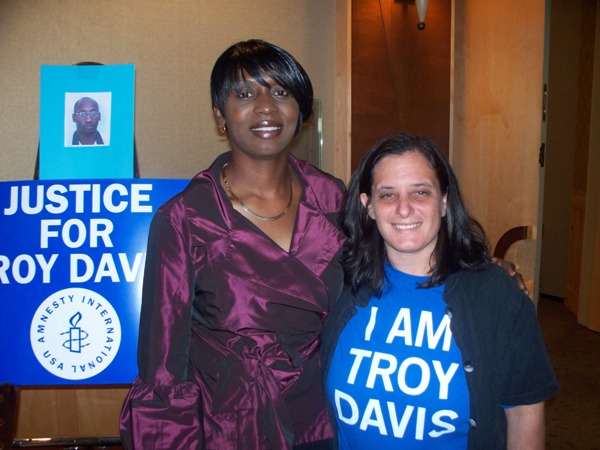 Like voices from the grave, Troy Davis and his beloved sister Martina Davis-Correia tell the story of their family’s nightmare odyssey through the criminal justice system and Death Row in the 2011 book, “I Am Troy Davis.”

Now the book’s other co-author, Seattle journalist and filmmaker Jen Marlowe, tours Oregon and Washington  next week with Davis’  surviving sister Kimberly Davis, speaking on the lives of Troy and Martina and what the case means for the larger society.

The Skanner News traded questions and answers with Marlowe this week in advance of the tour, which visits Seattle on April 8, Olympia on April 9, and Portland on April 10.

The Skanner News: What will you all be doing on this tour?

Jen Marlowe: Kimberly and I will be talking not only about Troy's case, reading from the book "I Am Troy Davis" and talking about the Davis's family two-decade struggle to prove Troy's innocence, but we will also be talking about how Troy's case is so emblematic of what is broken about our death penalty system, and the criminal justice system as a whole.

TSN: Your relationship with the Davis family was/is unique. How did you meet them and talk about your collaboration on I Am Troy Davis?

Marlowe: I first learned about Troy's case when I heard his sister Martina speak on Democracy Now! in July, 2007. This was right after Troy had survived his first execution date, and Martina was talking about her brother's case, and the close call he had just survived. I had never heard of Troy Davis before that, but Martina was clearly a force of nature, and I was compelled by her story instantly.

I became curious about this brother whose innocence she was fighting so tirelessly to prove, and began to do some research online.

Eventually, I found a website with Troy's address in prison, and wrote him a note expressing support and solidarity. About a month later, I got a letter back from him, and a friendship eventually grew out of a steady correspondence. It was Troy who first suggested, when I told him that I was a documentary filmmaker, that I might be a part of helping his family tell their story. (He originally suggested in a letter that I make a documentary film about Martina.)

When I met Martina a year later, in the spring of 2009, she mentioned that people kept telling her she should write a book, but that she would need to partner with somebody--she didn't have time to write a book. I immediately volunteered, and the project started from there.

Soon thereafter, I made my first (of many) trips to Savannah to get started on the book with Martina, and met the whole family. I went with the family to visit Troy, which was my first time visiting him on death row (though we were, by that point, writing and talking on the phone regularly.) During that first visit with Troy, we devised a way that he could contribute directly to the book, through letters and phone calls.

TSN: Is there any sense of how many incarcerated people are right now in the same position as Troy Davis?

Marlowe: We don't know how many innocent people are currently on Death Row, nor do we know how many innocent people are incarcerated not on Death Row. What we do know is this: There are 144 individuals who have been exonerated from Death Row, the most recent exonoree having spent 30 years there for a crime he did not commit. There are thousands more who have been exonerated who were wrongfully convicted and imprisoned, though not on Death Row. And, we know for a near certainty that we have killed other innocent prisoners aside from Troy, in the name of "justice."

TSN: Can you talk a little about Martina Davis Correia? What do you feel is her legacy?

Marlowe: Martina Davis-Correia was a warrior for justice and a warrior for human rights. For two decades she fought for her brother's life, and one of those decades she was fighting for her own life as well. Martina had been diagnosed with Stage IV breast cancer in 2001 and was given 6 months to live. At that point, with a six-year-old son to raise and a brother to get off of death row, she decided that dying was not an option, so she fought fiercely for her own life so that she could continue to fight for her brother, and raise her son.

When Troy's fourth (and final) execution date was set, Martina (whose health had been declining precipitously in the last months) all but busted out of the hospital in order to be there with and for Troy in what were his final days.

I stood with Martina on Sept. 21, 2011, on the grounds of the prison in Jackson, Ga., as the state of Georgia killed Troy. Soon after the U.S. Supreme Court declined to hear Troy's final petition, meaning the execution would begin, effective immediately.

I saw Martina (who was too weak to walk and was sitting in a wheelchair) talking to a young woman. Martina then called over Laura Moye, the Amnesty USA Death Penalty Abolition Campaign director, and introduced her to the young woman. This young woman had driven all the way from San Francisco in order to be there with Troy's supporters.

Martina wanted Laura to connect this young woman with the death penalty repeal activists in California, and help her get plugged into the struggle.

Scott Langley (a human rights photojournalist) took a snapshot of Martina introducing the young woman to Laura. The time of the picture was 11:08 p.m.

Only later did we learn that 11:08 p.m. was the precise time of Troy's death, the moment he succumbed to lethal injection.

What was Martina doing the moment that Troy died? She was recruiting another activist. She was enlisting another solider in the struggle to bring down the system that killed her brother.

That was the essence of Martina Davis-Correia.

TSN: What is the most important thing for our readers to know about your work, Troy Davis' life and the ongoing struggle against capital punishment?

Marlowe: Troy always said, and his family always said, that the struggle was bigger than him. The fight is for all of the Troy Davis's that came before him. and all that will come afterwards. It's about abolishing the death penalty -- but much more than that -- because the death penalty is the sharp edge of a very deeply flawed criminal justice system.

Our system of justice is supposed to be predicated on the notion of equal justice under the law, but in reality there is not anything close to equal justice. The justice you receive in this country has everything to do with race, with poverty, with geography.

The death penalty is the highest-stake consequence of this very broken system -- and reveals the tip of what is a human rights crisis in our country. We have 2,000,000 incarcerated human beings in this country -- more than any other developed nation in the world. Yes, we must abolish the death penalty. But that's just the start.

For more information on the “I Am Troy Davis” tour -- and Marlowe’s other work on Darfur and Bahrain -- go to www.donkeysaddle.org and click through ‘I Am Troy Davis’ links.