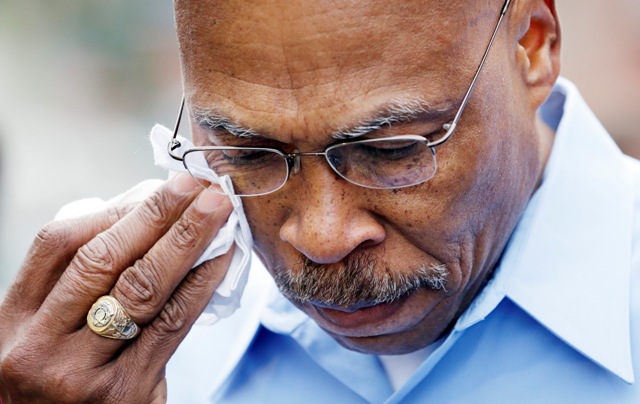 Snohomish County Executive John Lovick wipes his eyes as he listens during a news conference about a deadly mudslide that happened two days earlier, Monday, March 24, 2014, in Arlington, Wash. The search for survivors of the deadly mudslide grew Monday to include 108 names of people who were reported missing or were unaccounted for, but authorities cautioned the figure would likely decline dramatically. The size of the list raised concerns the death toll would rise far above the eight people who have been confirmed dead after the 1-square-mile (2.6-square-kilometer) slide Saturday swept through part of a former fishing village about 55 miles (80 miles) northeast of Seattle. Several people also were critically injured. About 30 homes were destroyed, and the debris blocked a 1-mile (1.6 kilometer) stretch of state highway. (AP Photo/Elaine Thompson)

ARLINGTON, Wash. (AP) — With search and cadaver dogs leading the way, rescuers using small bulldozers and their bare hands pushed through sludge strewn with splintered homes and twisted cars to find 10 more bodies in the debris of a Washington state mudslide, authorities said.

Despite the grim discoveries as the search entered its fifth day Wednesday — and the likelihood that more bodies will be found — officials were still hoping to find survivors.

"We haven't lost hope that there's a possibility that we can find somebody alive in some pocket area," said Snohomish County District 21 Fire Chief Travis Hots.

Two bodies were recovered Tuesday, while eight more were located in the debris field from Saturday's slide 55 miles northeast of Seattle, Hots said. That brings the likely death toll to 24, though authorities are keeping the official toll at 16 until the eight other bodies are recovered.

With scores still missing, authorities are working off a list of 176 people unaccounted for, though some names were believed to be duplicates.

Authorities said that number will change because more people have called in since the nearby logging town of Darrington's power was restored Tuesday.

Hundreds of rescuers and heavy equipment operators slogged through the muck and rain, following the search dogs over the unstable surface.

"Going on the last three days the most effective tool has been dogs and just our bare hands and shovels uncovering people," Hots said. "But the dogs are the ones that are pinpointing a particular area to look, and we're looking and that's how we're finding people."

A volunteer was injured Tuesday when he was struck by debris blown by a helicopter's rotor. The man was transported to a hospital for evaluation, but the injuries appeared minor, SnohomishCounty sheriff's spokeswoman Shari Ireton said in a statement.

As the increasingly desperate search progressed, reports surfaced that warned of the potential for dangerous landslides in the community.

A 2010 report commissioned by SnohomishCounty to comply with a federal law warned that neighborhoods along the StillaguamishRiver were among the highest-risk areas, The Seattle Times reported.

The hillside that collapsed Saturday outside of the community of Oso was one highlighted as particularly dangerous, said the report by California-based engineering and architecture firm Tetra Tech.

"For someone to say that this plan did not warn that this was a risk is a falsity," said report author and Tetra Tech program manager Rob Flaner.

A 1999 report by geomorphologist Daniel Miller, although not about housing, raises questions about why residents were allowed to build homes in the area and whether officials had taken proper precautions.

"I knew it would fail catastrophically in a large-magnitude event," though not when it would happen, said Miller, who was hired by the U.S. Army Corps of Engineers to do the study. "I was not surprised."

A year later, the U.S. Army Corps of engineers warned in another study that lives would be at risk if the hillside collapsed, The Daily Herald of Everett reported.

Residents and county officials were focused on flood prevention, even after a 2006 landslide that did not reach any homes.

"We were just trying to stabilize the river so we could save the community from additional flooding," said Steve Thomsen, the county's public works director.

In fact, the area has long been known as the "Hazel Landslide" because of landslides over the past half-century. The last major one before Saturday's disaster was in 2006.

"We've done everything we could to protect them," Pennington said.

Steven Swanson, 66, lived in the slide area for several years in the 1980s before moving down the road to Darrington.

"I've been told by some of the old-timers that one of these days that hill was going to slide down," said Swanson, who now lives in Northport in northeast Washington. "County officials never said anything to me about it while I lived it there, just the old-timers who grew up there."

Predicting landslides is difficult, according to a study published by the U.S. Geological Survey in 2012. One challenge is estimating the probability of a slide in any particular place.

Homeowners insurance typically does not cover landslide damage, but customers can purchase such coverage, said Karl Newman, president of the NW Insurance Council, a trade group in the Northwest.

One of the authors of the USGS report, Jonathan Godt, a research scientist with the agency in Colorado, said landslides don't get that much attention because they often happen in places where they don't hit anything.

But with Americans building homes deeper into the wilderness, he said, "there are more people in the way."