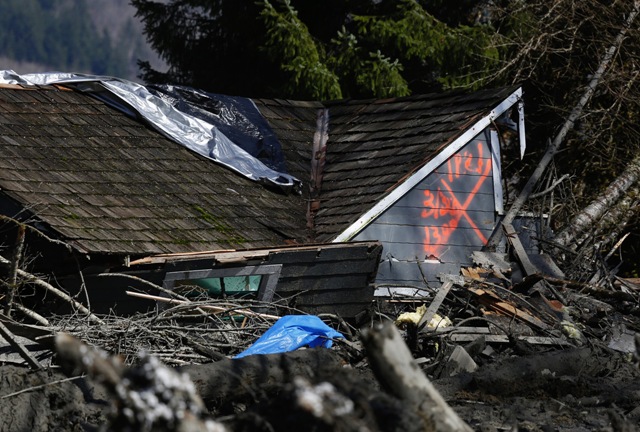 The orange X on a house, destroyed in the mud, indicates it has been searched for people on Highway 530, Sunday, March 23, 2014 the day after a giant landslide occurred near Oso, Wash. Rescue crews searched into the night for survivors from a massive mudslide that killed at least three people, after hearing voices from the debris field pleading for help. (AP Photo/The Seattle Times, Lindsey Wasson, Pool)

ARLINGTON, Wash. (AP) — There are 108 names on the list of people who've been reported missing or unaccounted for in the weekend mudslide in Washington state, authorities said Monday.

SnohomishCounty emergency management director John Pennington said that's the consolidated list from various sources that authorities are working from, and it doesn't mean there are that many injuries or fatalities.

Among the possible missing are construction workers coming into the neighborhood and people just driving by. Pennington added the slide occurred on a Saturday morning, when more people were likely to be home.

An overnight search turned up no additional survivors or fatalities.

He stressed that authorities are still in rescue mode and are holding out hope. But he noted: "We have not found anyone alive on this pile since Saturday."

At least eight people were killed in the 1-square-mile slide that hit in a rural area about 55 miles northeast of Seattle. Several people also were critically injured, and about 30 homes were destroyed.

Of the 49 structures in the neighborhood hit by the slide, authorities believe at least 25 were occupied full-time.

ARLINGTON, Wash. (AP) — Voices of people crying for help in the wreckage of a deadly Washington state mudslide have stopped, and hopes of finding any more survivors waned as searchers pulled more bodies from the tangled debris field and crews worked through the night into Monday.

At least eight people were killed in the 1-square-mile slide that hit just before 11 a.m. Saturday.

Search and rescue teams took to the air in helicopters and the ground on foot on Sunday looking for anyone who might still be alive. Their spirits had been raised late Saturday night when they heard the cries for help from the flotsam of trees, dirt and wreckage. Dangerous conditions forced them to turn back in the darkness, but they resumed their work at first light Sunday.

"We didn't see or hear any signs of life out there today," Snohomish County Fire District 21 Chief Travis Hots said. "It's very disappointing to all emergency responders on scene."

More people remained missing, and authorities said the number was "fluid." Earlier Sunday, they said it was at least 18, but that count came before additional bodies were discovered.

Several people were also critically injured — including an infant — and about 30 homes were destroyed.

Crews were able to get to the soupy, tree-strewn area that was 15-feet deep in places Sunday after geologists flew over in a helicopter and determined it was safe enough for emergency responders and technical rescue personnel to search for possible survivors, Hots said.

He added that they did not search the entire debris field, only drier areas safe to traverse. Hots said crews were still in a "search and rescue mode. It has not gone to a recovery mode at this time."

Before crews could get onto the debris field late Sunday morning, they looked for people by helicopter.

The slide wiped through what neighbors described as a former fishing village of small homes — some nearly 100 years old.

Officials described the mudslide as "a big wall of mud and debris." It blocked about a mile of State Route 530 near the town of Oso, about 55 miles north of Seattle.

Authorities believe the slide was caused by ground made unstable by recent heavy rainfall.

Washington Gov. Jay Inslee described the scene as "a square mile of total devastation" after flying over the disaster area midday Sunday. He assured families that everything was being done to find their missing loved ones.

The slide blocked the North Fork of the StillaguamishRiver. With the water pooling behind the debris, authorities worried about downstream flooding and issued an evacuation notice Saturday. The water had begun to seep through the blockage Sunday afternoon, alleviating some concerns, and the evacuation notice was lifted.

Shari Ireton, a spokeswoman for the SnohomishCounty sheriff's office, said Sunday that eight people were injured in the slide.

A 6-month-old boy and an 81-year-old man remained in critical condition Sunday morning at HarborviewMedicalCenter in Seattle. Hospital spokeswoman Susan Gregg said two men, ages 37 and 58, were in serious condition, while a 25-year-old woman was upgraded to satisfactory condition.

Bruce Blacker, who lives just west of the slide, doesn't know the whereabouts of six neighbors.

"It's a very close-knit community," Blacker said as he waited at an Arlington roadblock before troopers let him through.

Search-and-rescue help came from around the region, including the Washington State Patrol and the Army Corps of Engineers. More than 100 were at the scene.

Dane Williams, 30, who lives a few miles from the mudslide, spent Saturday night at a Red Cross shelter at the Arlington school.

He said he saw a few "pretty distraught" people at the shelter who didn't know the fate of loved ones who live in the stricken area.

"It makes me want to cry," Williams said.

Hots said searchers would continue their efforts through the difficult debris field.