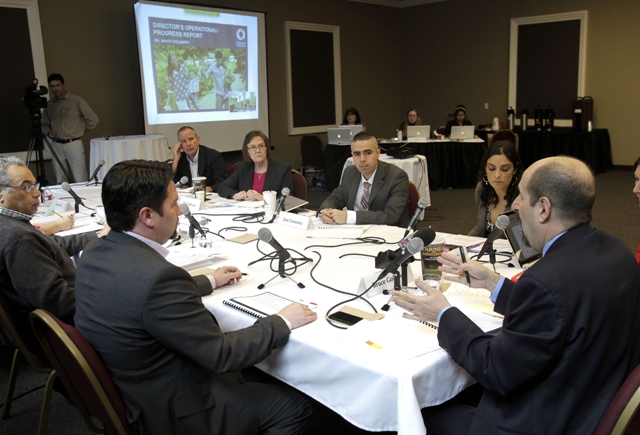 The Democratic governor said at a news conference that he has directed the Cover Oregon Board to find a new chief operating officer and chief information officer.

It will be up to the board when COO Triz delaRosa and CIO Aaron Karjala would be replaced, the governor's office said.

Kitzhaber also said Bruce Goldberg has resigned as director of the Oregon Health Authority, the agency which was originally in charge of designing and building the health exchange website.

Goldberg has been one of Kitzhaber's most trusted advisers and was instrumental in crafting the governor's health system overhauls.

Goldberg, delaRosa and Karjala did not respond to a request for comments from The Associated Press.

The review of the troubled exchange found poor management at Cover Oregon, "unrealistic optimism," poor communication, and an overly ambitious project scope as key reasons for Cover Oregon's failed launch. The governor ordered the review by Atlanta-based First Data Government Solutions in January at a cost of $228,000.

"Although past performance on the project indicated a history of missed deadlines and problems, the Cover Oregon leadership and the State continued to trust that performance would improve," the report says.

According to the review, there was no single point of authority on the exchange project. Key managers became "desensitized" to negative quality assurance warnings. A weak contract meant the state could not enforce deadlines or work quality. And competing priorities and a conflict between Cover Oregon and the Oregon Health Authority added to the problems.

Investigators also said the decision against using a system integrator to oversee exchange building, made by a former health authority CIO and approved by Goldberg, led to "lack of accountability" and "unrealistic delivery expectations."

The exchange's fiasco has created tremendous political pressure for Kitzhaber, who championed the exchange, and state legislators who overwhelmingly backed it. The governor has repeatedly said — and again insisted Thursday — that he was not disengaged from the Cover Oregon process and was repeatedly assured the project was on track.

"I don't think we were misled," Kitzhaber said. "I think we were given information that led us to believe that this project was going to be done on time."

Kitzhaber said no single person was to blame for the exchange problems. Rather, he said, "a series of people who made bad management decisions within a structure" bear the responsibility.

The state has paid Oracle Corp. $134 million in federal funds to build the exchange. Earlier this month, the state signed a transition agreement with Oracle and the company withdrew most of its developers.

Kitzhaber said Oregon now owns the code for the exchange. He said state has "no intention" of paying an additional $26 million in payments it's withholding for the broken website.

Oracle spokeswoman Deborah Hellinger declined to comment on the report or the governor's criticisms.

But in an interview with First Data, Oracle's Chief Corporate Architect Edward Screven said the exchange's problems were caused by weaknesses within the Oregon Health Authority and Cover Oregon, especially the lack of well defined, stable requirements, the absence of a system integrator and the lack of timely test cases.

More than five months after the exchange was due to go live, Oregon is the only state where the public still can't sign up for health insurance online in one sitting. The public and Cover Oregon staff must use a hybrid paper-online process to enroll in coverage.

Officials have said the full online Cover Oregon portal will not be open to the general public before the end of March, when open enrollment ends, because it has recently experienced "an unacceptable number of IT errors."

Despite the technology problems, Oregon has managed to enroll about 155,000 Oregonians in coverage through Cover Oregon. More than 47,000 of those enrolled in private health plans, while nearly 108,000 enrolled in the Oregon Health Plan, the state's version of Medicaid.

The enrollment figures still fall short of the Obama administration's original projections, which assumed 189,600 would sign up for individual policies by the end of February — although lower-than-expected enrollment isn't limited to Oregon.

The state is one of 14 running its own insurance marketplace.

"This was a perfect storm," Kitzhaber said. "We had a big IT project, a very inspirational but as it turns out a very unrealistic project."