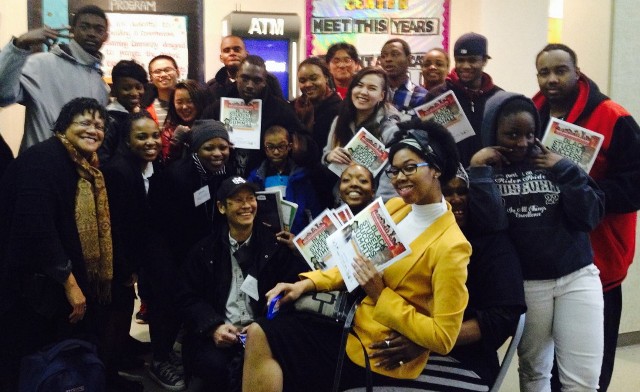 Both the conference and the Passage program are Causey’s brainchildren, developed over the past four years to help students of color navigate the college system and stay in school.

Imagine Causey’s dismay, then, when she reported to work on Monday, March 3, to be told that all her funding was used up and that her services with the program are no longer required.

In fact, PCC officials say the program is not dead and that Causey has not been fired; they do however admit that there is no funding for its activities, and the rest of its current staff are on the verge of running through their funding as well.

The Passage program, as profiled in PCC’s community magazine, offers tutoring, mentoring and scholarship application help to students, free of charge, on the Cascade Campus.

Designed specifically as a culturally competent focus on African and African American college students, the program was named for the Middle Passage that kidnapped Africans endured during the Trans-Atlantic Slave Trade.

“The Passage grew out of a focus group of female students of color that Causey assembled in 2010,” according to PCC’s article.

The notice to Causey came about 72 hours after newly-hired PCC President Jeremy Brown assured The Skanner News of his commitment to students of color and diversity at the institution as he seeks to fill the shoes of former President Preston Pulliams.

“And of course, in terms of leadership transition, one of the smart things to do is obviously figure out what's working well and not change those things. One of the things that’s really been at the forefront of the mission of the college is our commitment to diversity,” Brown said on Feb. 28.

“That's clearly not going to change, and it's something that I feel very strongly about in terms of our mission with respect to meeting the needs of a very diverse community and of course looking for opportunities to grow on that.”

Meanwhile, Interim PCC Cascade President Craig Kolins – whose regular position is Dean of Instruction for the Southeast/Extended Learning Campus --  now says that Causey’s event simply burned through all her grant funding, but that she is free to come back as a volunteer.

“Noni is in a casual position and so, employees in casual positions can work 959 hours, and so she's exhausted those hours. That's the policy at the college,” Kolins said.

“We're in the process of continuing the program, and bringing some student leaders that are from Passage, and people in from the community, to really sort of look at the program, how we can strengthen it, come up with the ideas and what we need to do to continue to improve the program,” Kolins said.

“I just want to say that we've got a lot of work to do to try to get improved programs for Black students at the campus, and we are not where we need to be.”

Kolins told The Skanner News that he will personally take charge of the effort on behalf of Black students, and he downplayed Causey’s role in establishing the Passage program.

“Actually it was a bunch of faculty, staff and students got together, and Noni was one of those people, she wasn't the only person to really come up with the idea of how to provide specific mentoring and tutoring support of Black students at the campus,” Kolins said.

He admitted, however, that the Black Student Success Summit was Causey’s idea and that despite the fact that it was successful, the school is not looking to continue Causey’s role as the organizer.

Asked how that effort would be different than what the college has been doing for the past several years, Kolins repeated that the college will begin looking for permanent resources, and that a Cascade Campus Multicultural Center is being discussed that might open in 2015. The Passage program might be included in that.

Members of the Passage community, who spoke to The Skanner News under condition of anonymity for fear of reprisal at the college, said they fear that Causey has lost control of the two programs she herself developed and brought to PCC and that Black students will suffer as a result.

“My concern is that the whole project is going to die because the institution is not committed to it, nor are they committed to making sure that Black students succeed,” one said.

“The college has created the conditions where Noni can’t even take the programs somewhere else where they might get more support.”

Click here for more information on the Passage program