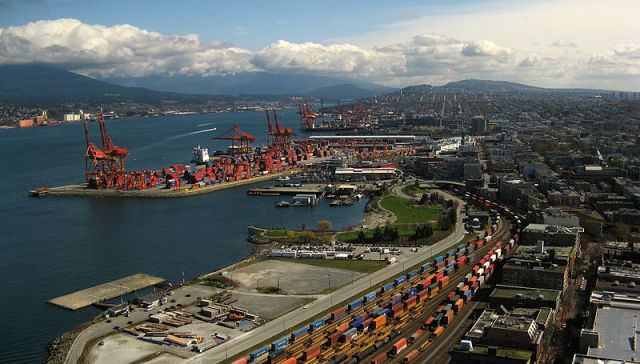 PORTLAND, Ore. (AP) — A Vancouver, Wash., grain terminal unfairly locked out employees for more than a year, but workers broke the law by making threats and engaging in violence during the dispute, according to a federal labor agency official.

Ronald Hooks, regional director of the National Labor Relations Board in Seattle, said in a complaint last week that United Grain should have provided the union with a "timely, clear and complete offer" of what it needed to do to avoid a lockout. Moreover, Hooks said the company, weeks before the lockout, unfairly discharged longshoremen who refused to operate equipment they considered unsafe.

United Grain disputes the findings, which were first reported by The Oregonian. A National Labor Relations Board administrative law judge will hear the matter June 30 in Portland. For now, non-union workers continue to operate the export terminal, and the two sides continue to negotiate a new contract.

"These disputes can linger on for quite a while and often end up being settled when an agreement is reached by the bargaining parties, rather than the completion of a long and litigious process," United Grain spokesman Pat McCormick said Friday.

Separately, Hooks said the longshoremen violated labor law by engaging in threats and violence in the early months of the lockout. For example, he said, picketers threw rocks at a security officer and threatened to rape a manager's daughter. An administration law judge will hear that matter July 21.

The twin cases result from allegations of unfair labor practices swapped by the sides last year.

The conflict started after the last labor contract expired Sept. 30, 2012. It began to boil three months later, when United Grain and two other Pacific Northwest grain terminals declared an impasse and enforced a contract that included new, management-friendly workplace rules.

United Grain imposed the lockout after determining a worker shoved a metal pipe into a conveyor and poured sand into a gear box. Longshoremen said the response was extreme and illegal, and they established a picket line at the Port of Vancouver.

Union spokeswoman Jennifer Sargent declined to comment on those allegations, preferring to focus on the lockout itself.

"Once the lockout is found to be illegal, ILWU workers will resume their jobs in the grain terminal and be awarded back pay," she said. "We're obviously looking forward to that outcome."