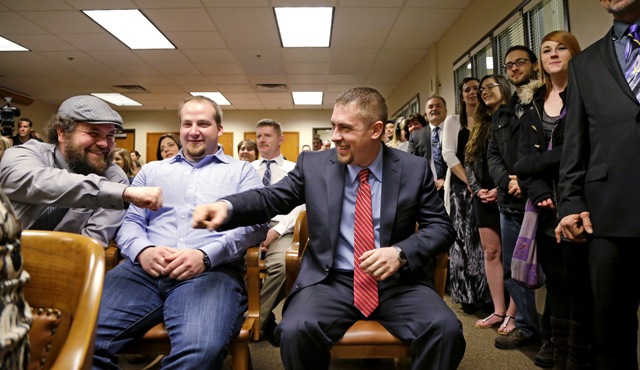 OLYMPIA, Wash. (AP) — Washington state issued its first legal-marijuana business license Wednesday, launching a new phase in the state's ambitious effort to regulate a market that has been illegal for more than 75 years.

Sean Green, who has operated medical marijuana dispensaries in Spokane and the Seattle suburb of Shoreline, proclaimed the document "beautiful" as it was handed to him at a state Liquor Control Board meeting in Olympia.

The license will allow him to grow 21,000 square feet of cannabis at his Spokane facility — the first pot that will be grown for sale under the highly taxed system approved by voters in 2012. The possession of marijuana became legal for adults over 21 soon after the vote, but it's still illegal to grow or sell it for recreational use until pot shops open in the state later this year.

Green plans to start by raising marijuana starter plants to sell to other growers, and later expand to growing buds for retail pot shops.

"Cannabis prohibition is over," Green declared to applause from a room packed with his supporters. "I'm coming home with jobs, Spokane."

The Liquor Control Board said Green got the first license because he was the first applicant to complete the process.

The board also received more than 2,200 retail applications, and is expected to hold lotteries in at least some areas before allowing 334 pot shops statewide. Washington's first pot stores are expected to open in June or July.

"It's easy to talk about what marijuana legalization might look like," she said. "It's a much different thing to see it roll out."

Green is chief executive of Spokane's Kouchlock Productions, a company named for the phenomenon of being too stoned to get off the couch. The board's three members credited the hard work he did to meet the requirements to obtain a license, including passing criminal and financial background checks, developing a board-approved business plan and finding a location that wasn't too close to schools or daycares.

"We're proud of you," board chairwoman Sharon Foster said. "We now know there are folks out there who follow the rules and are willing to be participants of this brave new venture in Washington state."

But even the issuance of the first license underscored the hurdles the industry continues to face. Pot remains illegal under federal law, and despite recent guidance from the U.S. Treasury and Justice departments, banks continue to be wary of working with marijuana businesses.

Green said he has lost bank accounts six times because of his connection to the pot industry, most recently last week. He already found another one but isn't sure how long he'll be able to keep it.

Green said he got involved in the industry after his decade-long career as an independent real-estate appraiser dried up. He took $10,000 and started Pacific Northwest Medical in Shoreline in 2011, later expanding to Spokane.

He plans to begin by growing 1,200 square feet of starter plants to provide to other growers as they become licensed. He said he plans expand to growing marijuana buds for retail, with 30 to 50 employees. For now, he plans to also continue running his medical operations, though the Legislature is considering whether to bring medical marijuana into the same system as recreational pot.

Green also said he plans to make cannabis-infused candies, as well as what he described as a "super joint," an ultra-strong marijuana cigarette made with cannabis oil and flowers.

Derek Franklin, president of the Washington Association for Substance Abuse and Violence Prevention, said he found it troubling that Green was getting the first license, with the message sent by the "Kouchlock" name as well as the idea of the "super joint."

"There doesn't seem to be much attention being paid to public health and public safety," he said.

Though the board praised Green for following the rules, some questions remained about his medical marijuana business. As first discovered by The Seattle Times, two of Pacific Northwest Medical's former employees filed complaints with the state Department of Labor and Industries alleging it had withheld their wages. The wages, totaling more than $1,600, were later paid, records show.

One of the complainants also alleged Green had sexually harassed another employee.

Department spokesman Matthew Erlich confirmed Labor and Industries received the two complaints. He said the agency would have referred the complainant who alleged sexual harassment to the state Human Rights Commission.

The commission said it never received any sexual harassment complaint concerning Green or his company.

Green said twice at a news conference he was unaware of the complaints. But Erlich later contradicted that, saying in an email to The Associated Press that the department dealt directly with Green to get the complaints resolved.

The liquor board's director said staff would not have considered the civil complaints in deciding whether to give Green a license.