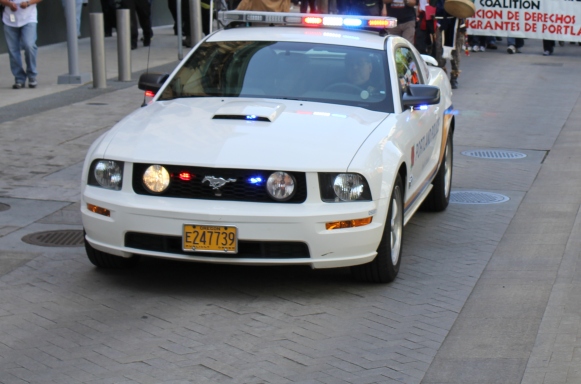 Portland Police Bureau last week released a report that breaks down stop and search data from 2011 by race.  The statistics show that both Black drivers and pedestrians are more likely to be stopped than other groups.

“African Americans/Blacks were more likely to be stopped compared to both their Census and accident data estimates,” the report states.

“This is the only racial/ethnic group in this analysis that is consistently stopped in greater proportion than their driving population would indicate. There were 1,296 more stops of African Americans/Blacks than we would expect given their approximate percentage of the driving population.”

Asians and Hispanics were less likely to be stopped, compared to their population numbers and accident data estimates.

However the report argues that the reason for the disproportionate stops is not racial profiling.

“African-American residents in Portland are more likely to live in neighborhoods with higher calls for police service and crime, creating a greater risk for being stopped and searched,” it says.

At the same time, Blacks, Hispanics and Asian drivers were less likely to actually have drugs, alcohol or weapons when they are searched.   However, 4.8 percent of Black drivers who were searched were found with guns compared to 3.7 percent of Whites.

The report also covered pedestrian stop and searches.  In all three precincts African Americans were stopped at rates far higher than their presence in the Portland population (around 6.6. percent.) In overall numbers the report found the racial breakdown of pedestrian stops was :

However, several factors mean these figures cannot be taken at face value:

“Many individuals are known to the police and are repeatedly stopped (this is particularly true of a small number of very active gang members and individuals who are prohibited from being in drug impact areas). ..

“The Bureau’s emphasis on reducing gang violence results in increased contact between police and these individuals. It also increases the police presence in areas which these individuals frequent. Approximately 48 percent of identified gang members are African American/Black, 32 percent are Hispanic, 14 percent are White, 4 percent are Asian, and 1 percent are Native American. The percentage of identified gang members in Portland who are Black and Hispanic are concerning considering their proportions to the population in Portland. This disparity is believed to be related to an influx of California-style gangs from the mid 1980’s and early 1990’s and is disproportionately impacting youth that are vulnerable in social structures such as education, poverty, and intergenerational gang influences.”

Stop data alone can’t say whether racial profiling is occurring, the report says. Tactics such as Hot-Spot policing, where police concentrate their efforts in high-crime neighborhoods, can result in higher stops for African Americans.  However it can help to identify disparities.

Andrew Riley, public policy director for the Center on Intercultural Organizing, said the figures suggest profiling is at least part of the problem.

“What really gives me pause is that Black folks are only about 6 percent of the city’s population, but as many as one in five of all pedestrian stops,” he said.

“We have known for a long time we have issues with disproportionate policing but at the same time it’s still disturbing to see the numbers in print.

“It’s hard for me to say there is a 1-1 ratio between profiling and the data we see. At the same time we do know profiling is happening. CIO members come in on a fairly regular basis to talk about their interactions with the police, and the fact that they have been profiled. So when the Portland Police argue that there is no profiling or profiling is not, at least partly, responsible for these statistics, then I have a hard time believing that. “

Currently Portland Police Bureau is working with Community and Police Relations Committee members to develop an equity plan and training for all PPB staff.