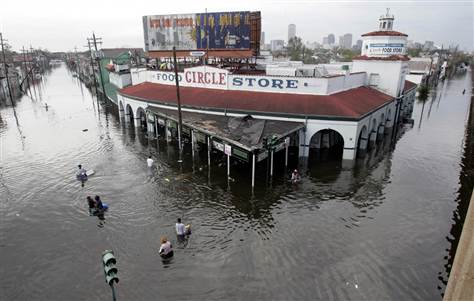 Washington, who grew up in Portland and attended Oregon State University as an undergraduate, was one of the very first scientists to create a model of the atmospheric impacts of climate, and is a pioneer in the understanding of global warming.

Currently a senior scientist at the National Center for Atmospheric Research, in Boulder, Colo., Washington shared a Nobel Prize for climate change research in 2007 and was presented the National Medal of Science by President Barack Obama in 2010.

The Skanner News spoke with Washington about his work and its implications for Pacific Northwest communities. (Photo: Hurricane Katrina.)

The Skanner News: Dr. Washington how would you describe your area of study?

Warren Washington: I'm basically a scientist who'd gotten a PhD from Penn State way back in 1964. Actually I started in 1963, working with my colleagues to build one of the first computer models of the atmosphere and the climate system.

TSN: You must've spent decades on this work before people even knew what you were talking about.

Washington: Well, it wasn't quite that bad. Maybe the world did not pay too much attention, but the policymakers did. For example, even in the 60s and 70s, with the earlier versions of our models, we were able to show what might happen with increased carbon dioxide and other greenhouse gases in the atmosphere, and how that might lead to global warming.

That got the attention of policymakers and so forth, so that over the years we've been able to improve our models, make them more reliable and with fewer biases, and show all kinds of things.

For example, one of the things that might surprise you is that when you warm up the atmosphere, the oceans, of course, warm up also, and you get more water vapor in the atmosphere. So when it rains it's more likely to rain with a higher intensity. Therefore it would lead to more flooding events and things of that sort.

We were able to look at things like that and also look at how El Niño might change, and how droughts may form more readily in certain parts of the world. We're able to give policymakers and the public a lot more information about what climate change means.

TSN: Can you talk a little bit about what your concerns are as far as environmental justice and the societal impacts of these wide-scale changes in how we live?

Washington: It's a complicated subject, because environmental justice can be different things in different parts of the world and at different times.

For example, if you lived in the south, if you're not very wealthy, you’re likely to live near rivers in the low-lying areas of the cities and also in places where there's lots of air pollution caused by the burning of coal, and other airborne chemicals. So you're going to obviously have some increase in medical problems and maybe even premature death.

In other places, environmental justice means that, as we get into more extremes in terms of heat waves and things like that, a lot of people live in houses where they don't have air-conditioning. They're likely to be more affected by the warmer temperatures. A curious thing about it, you remember in Chicago when they had a heat wave …?

Washington: Yes, and a lot of people were afraid to keep their houses open because they were concerned about burglaries and attacks. So there's lots of feedback in the system dealing with the impacts of climate change.

TSN: And that Chicago heat wave was a real turning point for some people in terms of believing in global warming, I think because so many people died – I believe 750 people died.

But we know that you're twice as likely to have a heat wave as a cold wave, and so that's another indicator that the climate is indeed changing.

TSN: What do you think is the most important thing for our Pacific Northwest audience and readership to know about this issue?

Washington: Well I think that for the Northwest and the Portland area, there will probably be an increase in heatwaves. They'll be more frequent and also there will be more intense rainfall at certain times of the year, just because the atmosphere is holding moisture as it warms up and therefore you're going to be getting more severe and extreme types of weather. So we have to be prepared for that kind of climate change.

TSN: We wrote last year about how the Multnomah County Health Department rolled out a new program to help people deal with the impacts of global warming in their own homes. In King County, Wash., the Seattle area, they did that a couple of years earlier but they included extreme weather events in their list of things that people have to look out for.

Here in Portland the health department did not do that, and about three months ago our photographer at The Skanner in Seattle -- her house was crushed by a tree in a freak windstorm and she is still sending us her photos from Starbucks. Do you get the sense that there's even variability in depending on region?

Washington: Yes but I would expect that over time, the climate changes in Seattle would be quite similar to those in Portland. So I think that if you want to look at statistics in terms of rainfall events and the intensity of the rainfall, it could be as you just suggested, you could have stronger winds and therefore the trees would be more likely to fall. Also when you get stronger rainfall events, if you live in a hilly area you're likely to have more flash floods and be affected by high-water events.

One thing I would like to mention is that I'm the second African-American to receive the National Medal of Science, which is the highest award you can get in from the federal government. I try to do my part for increasing diversity, I try to make it easier for African-Americans, and all students, to advance and get their careers started in the field.

For more on Washington’s work go to www.lclark.edu.