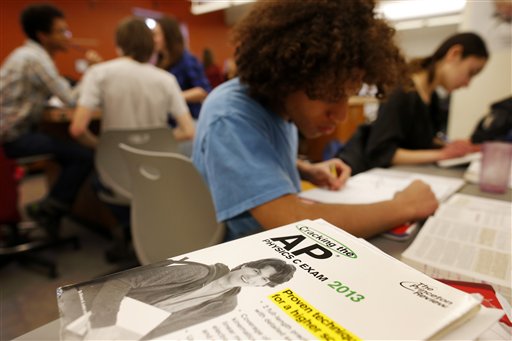 The state ranked 29th in the percentage of its 2013 graduates who passed at least one AP exam during their high school career, the College Board said Tuesday in its annual “AP Report to the Nation.”

The results show 15 percent of recent Oregon graduates had an AP score of 3 or better on an exam — the mark associated with receiving college credit. That trails the national average of 20 percent. Meanwhile, only 24 percent of the recent graduates took at least one AP course during high school, well below the U.S. average of 33 percent.

In Washington, 34 percent of students enrolled in at least one AP course and 21 percent scored a 3 or better on an exam. California also easily bested Oregon while Idaho trailed the Beaver State in both categories.

Advanced Placement classes are seen as good preparation for college and there has been a state and national push to get more students to enroll.

Deputy superintendent of Oregon schools Rob Saxton noted in a statement that far more students take AP courses than 10 years ago. But he also identified two “troubling trends” — teenagers who have the potential to succeed are not bothering to participate and many are students of color.

The College Board statistics show less than 10 percent of Oregon's Hispanic, Native American and African American graduates got a score of 3 or higher on an AP exam.

Saxton said educators must do a better job of identifying good candidates, getting them to enroll and providing them with support.

“All of our students deserve a clear path to college and that starts with ensuring that each and every student has access to rigorous content and the opportunity — and encouragement — to earn college credit while in high school,” he said.

Oregon officials have said boosting the AP participation rate is an important step in meeting the state's “40-40-20” goal. By 2025, the state expects to see 40 percent of students attain at least a four-year degree and another 40 percent earn an associate's degree or other career credential. All students will be expected to graduate from high school.