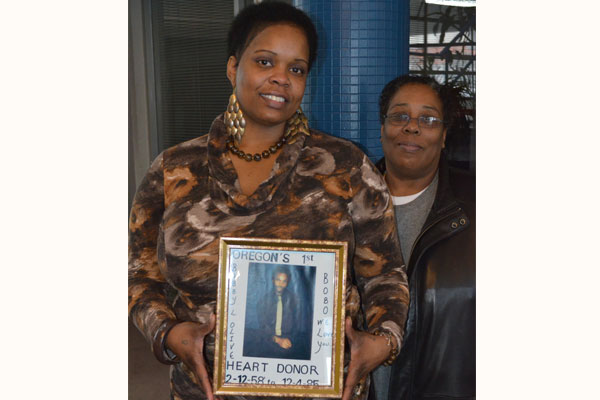 Many people have heard the story of Oregon’s first heart transplant, conducted at Oregon Health and Sciences University in 1985 by Albert Starr, M.D., and its recipient, 44-year-old Wesley Merrill, a construction worker from Battle Ground, Wa.

Fewer people have heard about the donor of that heart — 27-year-old Bobby Lewis Olive Sr. of Northeast Portland.

Now Bobby’s family is holding a special Black history event coinciding with Valentine's Day to honor his memory and his contribution to Oregon, Saturday, Feb. 15 at the Miracles Club, 4200 MLK Blvd. from 4 to 9 p.m.

“When he passed it tore our family apart,” Shannon says. “I knew about it, but I didn't understand that he gave his heart to someone else.

“It didn't register with me until I got old enough to understand.”

Now, Shannon says, she is dedicated to raising awareness about the need for organ donors and the role they play in saving lives every day.

Shannon, who was her father’s favorite, only recently learned his place in Oregon medical history, after her Aunt Balinda brought over a 29-year-old video of the operation.

Press accounts of the incident are conflicting but what is known is that Bobby was shot in the head by a drug dealer; brain-dead and on life support at Legacy Emanuel, his situation became known to doctors at OHSU because his blood type – B – was the same as Merrill’s. Doctors agreed Merrill only had a short time to live.

“My dad was a family man,” Shannon says. “My dad would take me everywhere, I remember it like yesterday.

“I remember my dad braiding my hair, I remember him taking me to the grocery store; my dad talked to me all the time, he shared stories with me.

Shannon is the middle sister of four kids – her sisters are Tamisha and Malicka and her brother is Bobby Jr., born after his father’s death.

Shannon was just seven years old when he was shot.

“When my dad came home every day I just I looked for him,” she says. “Not a day went by that I didn't wait at that door to see him come in.

“And I remember him telling me that every day is not going to be a good day.”

Currently, Shannon is studying at PCC to become a criminal youth probation officer, and she is active with student government; she plans to transfer to PortlandStateUniversity for a psychology degree. She volunteers as director of the outreach ministries for Greater Solid Rock Church of God in Christ, where she works with the homeless.

Shannon – herself the mother of a 15-year-old and a 17-year-old -- says her life was turned upside down when her aunt plugged film of the heart transplant into her DVD just two weeks ago.

“I got to see them bringing my dad's heart, with the icebox, into the hospital -- I actually got to sit there and see the whole procedure and the doctors talking about it.

“That's when it really dawned on me that this was my dad who did this,” she says.

The idea of an event was her aunt’s way of bringing Shannon into an active role in Donate Life Northwest, Shannon says.

“’People need to be reminded not of how he died, but of what he did when he died, so let's put this together,’ and when she said that I said yes, Auntie.’”

Shannon says that her grandmother, Martha Van Arsdale, was asked by doctors whether she would agree to donate her son’s heart to a complete stranger -- even as she was told that her son was brain-dead.

“The doctor asked if she would donate the organ; she had to think about it. She said she didn't want to, but that she had to talk to her heavenly father.”

Van Arsdale told the doctors that she could not donate her son’s heart to a stranger – that she had to know the recipient’s name, which was strictly against the rules at the time.

“The doctor told her they could make that happen, and Grandma said that, before she could even get up, her heavenly father spoke and said, ‘Go ahead give them the heart.’”

Van Arsdale she passed away two years ago.

The heart recipient and his wife have also since passed away, but Shannon smiles as she shares a few funny stories about them that have been passed down in her family.

“My grandmother asked Wesley's wife if she minded that her husband had the heart of a Black man,” Shannon says.

“Wesley's wife said no – and that the new heart changed his personality; he started to love jazz music and clean the house, and now he liked to cook.”

For more information on Donate Life Northwest go to www.donatelifenw.org.