Photo and Story by Monica Foster of The Skanner
Published: 18 January 2006 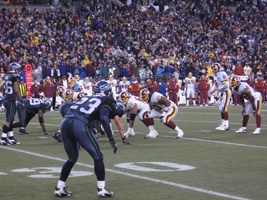 The Seattle Seahawks are now 14-3 and bound for the NFC Championship game after defeating the Washington Redskins 20-10 in Saturday's divisional playoff game at Qwest Field. With the victory, the Seahawks ended their 21-year run without a playoff win.


The play that virtually clinched the game was fullback Mack Strong's 32-yard run late in the fourth quarter, the longest of his career and of the Seahawks' post-season.


"Mack is just amazing," said fellow Seattle running back Shaun Alexander. "To have the greatest run carry of his career put us in the NFC Championship in Seattle. If somehow we beat Carolina, somehow win the Super Bowl and Mack wins MVP, you couldn't ask for anything greater to happen to that guy. He just plays with his heart every single game and it's exciting when good things happen for him."


The Seahawks finished with an NFC- and franchise-best 11 consecutive wins. League MVP Alexander amassed a team-record and NFL-high 1,880 rushing yards and a single-season NFL record of 28 touchdowns.


Alexander suffered a concussion late in the first quarter and left the game. That left running back Maurice Morris to step in, and he went on to run for 49 yards and make a key catch late in the game for 16 yards. Alexander is expected to play in Sunday's NFC Championship game against the Carolina Panthers at Qwest Field.


The Panthers are 11-5 coming off a 29-21 win against the Chicago Bears Sunday and will be without key running back DeShaun Foster, who suffered a broken ankle early in the second half. Nick Goings will step in for Foster to try to help the Panthers reach their second Super Bowl in three seasons. This will be the Seahawks' first conference title game since 1983. The winner of this game advances to Super Bowl XL in Detroit on Feb. 5.