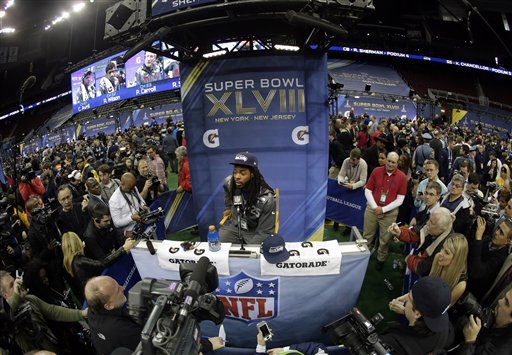 Well, right there in the middle of a scrum of more than 6,000 journalists, costumed characters, celebrities and attention-seekers.

The NFL held its annual circuslike event Tuesday, and the site of this one featuring the Denver Broncos and Seattle Seahawks was the Prudential Center — a hockey arena that normally serves as the home of the NHL's New Jersey Devils.

“It's a lot of people that don't have much to do, I don't know,” Seahawks fullback Michael Robinson said with a smile. “All the attention over one game, sometimes it can be overwhelming. I'm just excited to be here enjoying the process and I just can't wait until Sunday.”

But first, there was the spectacle of media day to get through.

TV3 Denmark reporter Tommy Kjaersgaard wore a red-and-white striped shirt, round spectacle frames and blue pants in costume as the titular character of the “Where's Waldo?” franchise of children's books.

Internet star Lil Terrio was there, too, and he danced with cheerleaders. There was an Austrian man dressed as Mozart, and another in a superhero costume. Regis Philbin, singer Michelle Williams and actor-comedian Nick Cannon also showed up.

“It's crazy,” Denver guard Zane Beadles said. “This is quite the spectacle. I have never been a part of anything like this before with all these people, but it's very fun and a very exciting time.” 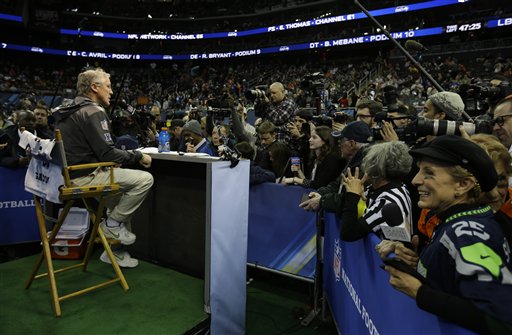 Here's a quick look at a few of the Super Bowl story lines from Tuesday:

STRANGE QUESTIONS: When it comes to Super Bowl media day, pretty much anything goes.

From marriage proposals to favorite foods, players have heard it all over the years. Seattle defensive lineman was asked by a woman for a kiss — but said no. Seahawks center Max Unger was asked by a man to feel his bushy beard — and let him.

Seahawks wide receiver Golden Tate captured all the wackiness by wearing a Google Glass and a Go Pro camera on his hat to show his family. Because, let's face it: Until you experience media day yourself, you can't believe all the hijinks.

The Seahawks running back, known for not cooperating with the Seattle media during the season, spoke for 6½ minutes before leaving. and then returning

Wearing a cap, hood and dark sunglasses, Lynch returned to speak to Deion Sanders for NFL Network, to the Seahawks website, and to Armed Forces Network — and acknowledged he was trying to avoid being fined by the league for not meeting his media requirements.

He slipped a profanity to Sanders, and three times described himself as “smooth” to the Hall of Fame cornerback, adding: “I ain't never seen no talk that won me nothing.”

POPULAR GUY: Peyton Manning drew what appeared to be the biggest crowd at media day, rivaled only perhaps by Seattle's Richard Sherman.

During his hour-long session, the Broncos quarterback acknowledged that he had “concerns” about whether he could come back from the neck operations that threatened his career two years ago.

“The doctors just couldn't tell me anything definite,” he said. “They wouldn't say, 'You're going to be back at this time, at 100 percent strength level.' They couldn't tell me. ... It was a matter of a lot of faith and trust.”

He was also repeatedly asked about his “legacy,” something he said he's heard about since he was 25. 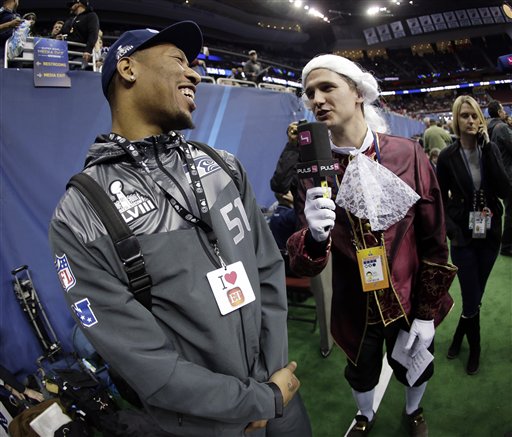 After Sherman's angry 20-second rant after the NFC championship game sparked a national debate over sportsmanship and racial attitudes, the Seattle cornerback was funny, accommodating and didn't raise his voice except to make sure reporters heard him.

He also praised his teammates — and the Denver Broncos.

But he's still a chatterbox. He began his session a few minutes before he even had to, and had to be pulled away by an NFL official after answering a few more questions past his 60-minute requirement.

Harvin, who has yet to play a full game while healthy this season, returned to practice last Wednesday after passing the NFL's concussion protocol following a head injury suffered in Seattle's NFC divisional playoff game against New Orleans.

“I am absolutely playing,” he said without hesitation.

Prater missed practices from last Thursday through Saturday with flu-like symptoms. He kicked Monday for the first time since the AFC championship game.

“I'm feeling a lot better and I should be fine Sunday,” Prater said. “I mean, I wasn't dying.”