Monica Foster of The Skanner
Published: 09 May 2007 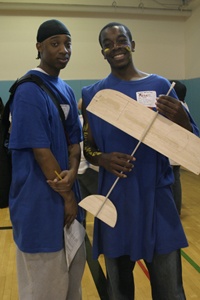 This Saturday, more than 600 students from 25 local elementary, middle and high schools will compete in a hands-on math and science competition at the seventh annual Seattle Mathematics, Engineering, Science, Achievement Day competition at Rainier Beach High School, 8815 Seward Park Ave. S.
The public is invited to see hands-on projects the students have been working on from 8:45 a.m. to 2:20 p.m.
MESA is a program that prepares young girls and students of color for careers in math, engineering and science, beginning in elementary school and continuing through high school. Students are taught to apply their learning to real-world situations.
MESA services include enriched math and science classes; after school and summer programs; pre-college advising and support; participation in national engineering conferences; local, state and national competitions; internships with local businesses and research centers; role models and mentors; parent workshops and field trips; teacher professional development; and integrated science and math curriculum.
"The main purpose of our program is to help students of color and girls achieve their full potential in math, engineering and science," said Seattle MESA Director Anna-Maria de la Fuente.
Students are working on a variety of projects including designing a balsa wood glider to soar 100 feet or more, a bridge design competition, or an egg drop competition in which the students have engineered a way to keep an egg from breaking after dropping it from a height of eight feet.
Some of the older students have built their projects in class and will bring them to the competition to be judged.
MESA supports students, teachers and parents with innovative, hands-on opportunities and programs. MESA also partners with higher education leaders brining them into the classroom to engage K-12 students in the careers of the future.
"We work with the students directly as well as with the teachers and parents," de la Fuente said. "It's important because it gives the kids opportunities and they say it makes math and science fun, they like the community. It builds peer groups of support where students can say, 'People that look just like me are going to college pursuing math and science and its OK for me to do that too,' " de la Fuente said.
De la Fuente spent eight years teaching at Rainier Beach. The former MESA, math, and English teacher explained, "As a math teacher, it helps you make connections to the real world for your kids so that they see math not only as something they do in math class but they can actually use in a lot of different careers and for the parent we help with who they need to speak with at the schools to make sure their kids are taking the right classes."
The Seattle MESA program began in 1982 with 88 students in four high schools. Today, more than 5,000 students participate in MESA programs across the state of Washington.  "We're in eight elementary schools in Central, Southeast and Southwest Seattle, several middle schools and in nine high schools," de la Fuente said. "The high school kids have a 10th grade elective class that they take on top of their math and science, but the rest of it is more integrated into the math and science that the teacher is already teaching."
Currently, more than 1,200 students participate in MESA programs and events. MESA has a proven track record — more than 96 percent of high school seniors go on to college and more than 65 percent plan on pursuing majors and careers in mathematics, science and engineering. Nearly 70 percent of African American, Native American and Latino students in Seattle's MESA ninth-grade program have a 3.0 grade point average as high school freshman, compared to only 20 percent of their peers. MESA alumni are also five times more likely to graduate with a degree in mathematics, science and engineering than their peers.
"Our students get degrees in math, science or engineering much (more often) than the general population, not just African American, Native American or Latino but much (more) than everybody," de la Fuente said. "Students may come into the program in kindergarten and continue through their senior year. We have summer programs, SAT classes and summer science and math classes so there are a lot of different ways a student can get involved with MESA."
MESA Day is sponsored by the Microsoft Corporation and hosted by Rainier Beach High School. About 100 volunteers from the Boeing Company, IBM, Microsoft, the Washington State Department of Transportation, University of Washington and other organizations will act as judges and role models.
Honorary Chairperson state Sen. Margarita Prentice will speak during the opening presentation.
Students will partner with other students in their grade level from other schools during the competition and build their projects on-site to promote friendly competition.
Seattle MESA is funded from a mix of private, public and community cash and in-kind support. Every dollar donated goes directly to students, parent and teacher services.
The schedule for Seattle MESA Day is as follows:
8:45 a.m. — Opening ceremony
9:30 a.m. — Math Olympiad
10:25 a.m. to 12:50 p.m. — Hands-on engineering and science events
1:30 to 2:20 p.m. — Medal ceremony.