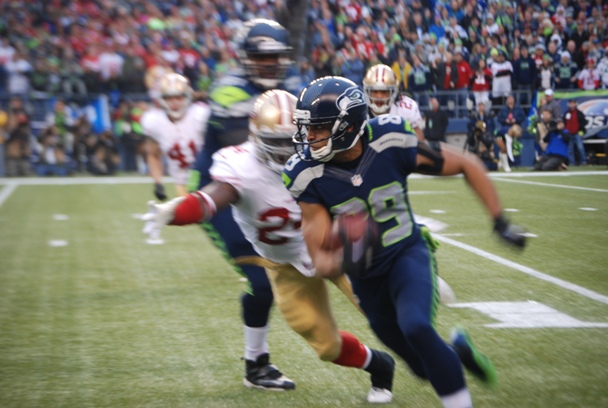 PORTLAND, Ore. (AP) — With the Seattle Seahawks just 10 days away from the Super Bowl and the Portland Trail Blazers among the top teams in the NBA's Western Conference, Paul Allen was happy to talk about the success of his teams.

Allen, who normally shies away from the spotlight, volunteered his thoughts during halftime of Portland's game against the Denver Nuggets on Thursday night.

The Seahawks will play the Denver Broncos at the Meadowlands a week from Sunday. Meanwhile, his Blazers are seeing surprising success, sitting in third place in the West at 32-11 after rallying for a 110-105 win over the Nuggets

Allen, the billionaire co-founder of Microsoft, is obviously pleased.

“It's been an incredible year for the Seahawks,” he said. “The support of the fans has been amazing. Then, just the way the team has come together, the way the defense has played, the way our offense has been able to make timely plays like they did in the NFC championship, Russell Wilson's performance in his second year.

“All that has carried us to the Super Bowl and it's been an amazing experience for the fans and for me as an owner.”

He was probably his most animated when he spoke of raising Seattle's 12th Man flag before the NFC championship victory over the San Francisco 49ers last weekend.

“When you get that kind of positive feedback, it makes you feel good about what you've been able to help the team accomplish,” he said.

Allen, who bought the Seahawks in 1997, is going to his second Super Bowl. The Seahawks lost to the Pittsburgh Steelers 21-10 in 2006.

He was asked his take on cornerback Richard Sherman's postgame rant in the aftermath of the victory over the Niners on Sunday. Sherman apologized after the emotionally-charged on-field interview for taking attention away from the performances of his teammates.

“When you sit down and talk to Richard, he's a very engaging, intelligent, good-hearted guy,” Allen said. “All of us realize, if you're going to the Super Bowl, everything gets magnified. You have to keep that in your mind.”

Allen purchased the Trail Blazers in 1988 but he's never been to an NBA championship with the team. Portland's only title came in 1977.

Wearing a Blazers cap, Allen said he was encouraged by the direction the team has taken under general manager Neil Olshey and coach Terry Stotts.

“To have the record that we have at this point, halfway through the season, is very, very encouraging,” he said. “But we still have a ways to go.”

He would not talk about a possible contract extension with forward LaMarcus Aldridge, who scored a career-high 44 point and added 13 rebounds in the victory over the Nuggets. Aldridge is having a career season with an average of 24.7 points and 11.6 rebounds a game.

“As you guys know, at the appropriate time we'll consider all those options,” said Allen, adding that extensions are usually dealt with at the end of the season.