Brian Stimson of The Skanner
Published: 09 May 2007

It is still in its infancy, but a new TriMet project in downtown Portland should make it easier for North Portland residents to access all that Portland State University has to offer.
TriMet just hit the eight-week mark in its construction of an extended Yellow Line MAX light rail system, which will extend from North Portland to the PSU campus in 2009.
PSU President Daniel Bernstine hopes the new light rail lines will turn the campus into a destination for activities not limited to students. And with about 40 percent of students using public transit to get to class, Bernstine says it will increase transportation options to get to the campus.
"We're building a neighborhood not just a university campus," Bernstine said. "I hope it makes it easier for people all over town to get to campus."
For anyone traveling through Downtown or near I-205, the light rail construction has been unavoidable. Whether traveling to PSU, switching buses on Third or Fourth avenues or walking through Old Town, running into TriMet construction is omnipresent. 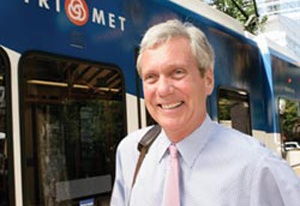 TriMet Director Fred Hansen said the biggest challenge for construction in the dense urban environment has been the relocation of utilities. Utility lines and pipes under the streets aren't always where the century-old designs say they are, and digging under the streets can be unpredictable. But no buried treasure yet, Hanson said.
Construction on the I-205 line – which includes seven bridges and one underpass – continues in an easier fashion than the Fifth Avenue stretch, as much of the I-205 line is being constructed in an established transportation corridor.
With summer arriving, construction on the MAX Green Line has many benchmarks being met and others just beginning for the 8.3 mile, $575.7 million project that will expand light rail service to Clackamas County and extend the Green and Yellow lines down to PSU. According to TriMet spokesperson Mary Fetsch, construction is on budget and on time – with track being laid in portions of Downtown and pilings being driven along I-205.
In an effort to minimize the impact on businesses on the construction corridor, Hansen said construction projects focus on three to four blocks for about eight weeks. Currently on Fifth Avenue, the segments of rail and utility work between Salmon and Jackson streets, and Burnside and Stark streets, for example, are just finishing up, while other segments – between Everett and Burnside streets – have just begun.
"A number of businesses say it's (business) about the same … some have even reported business is up," Hansen said. "You don't take that for granted."
Another thing TriMet isn't taking for granted is the inclusion of minority-, women-owned and emerging small business. About 23 percent of TriMet's employees on the mall project are minorities, and 32 percent of the workers on the I-205 project are minorities. Hansen said TriMet tries to include many minority- and women-owned and emerging small business subcontractors on the project to give them experience on a large city project.
"There are many small businesses who have not had a chance to work on a large civil project," Hanson said.
The Interstate MAX Yellow Line project significantly raised the bar on for including minority employees, he added.
Fetsch said construction of the Green Line is estimated to take about 900,000 work hours. Construction is scheduled to last until 11 p.m. at most sites, with quieter work happening after 6 p.m.
And with the completion of the fifth stretch of light rail in Portland, Hansen said the national profile of Portland as a city with excellent public transportation – Portland recently made the New York Times' travel column as a city with great public transportation — will continue to gain attention.
Hansen, who said he's proud to have been able to oversee the organization during this expansion, said TriMet has helped make Portland the city it is today.
"We've been able to transform the community and rebuild neighborhoods," he said.