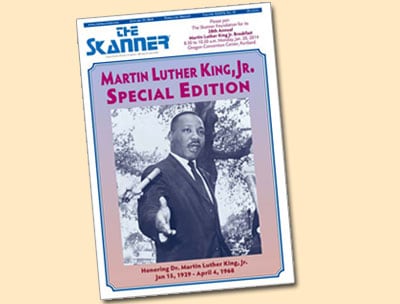 As we mark what would have been Martin Luther King, Jr.’s 85th birthday this year, all eyes are focused on the fact that his life’s work remains incomplete. In this year’s Martin Luther King Special Edition, you will find bitter commentary about poverty, jobs, war and the lack of opportunity.

You will also see that our local readers, asked for comment about what King would do today, remain hopeful for the future. Many added another piece to the puzzle: Love for humanity.

The statistics are a testament to the failure to make basic improvements in the lives of the least advantaged people in our nation.
What would Dr. King do if he were alive today? The bigger question is: What are we going to do today?

The Skanner News would like to thank the following sponsors for their support of the 2014 Martin Luther King, Jr. Special Edition