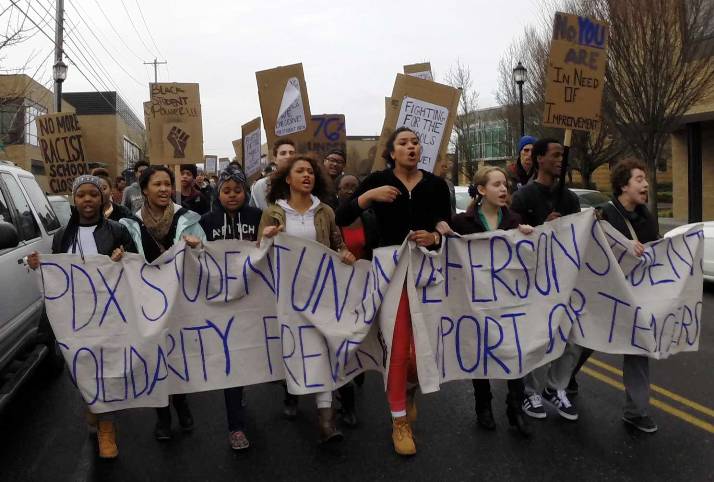 Students at Jefferson High School walked out Jan. 10 to voice their support for their teachers and to demand smaller classes. The teachers union is currently in contract negotiations with Portland Public Schools.

Chanting “We are the future,” and “We deserve a better education,” the students marched out of the school and walked along N. Killingsworth St. Some held signs with messages such as “We love our teachers,” and “No racist school closures."

After a short but exuberant march, protest organizer Sekai Edwards called on the group to return to class.

“We’re going to go back to our classes and be the best students we can be,” she said.

Students at Wilson High School also planned to walk out Friday, and a small group of Cleveland students came to support the Jefferson protest.

The students also called attention to a planned  rally at 5: 30 p.m. Monday Jan. 13, before the school board meeting at PPS administration building, 501 N Dixon.  And they called on the community to turn out and support the teachers at the meeting.

The Portland Association of Teachers is expected to respond to the Portland Public Schools’ latest offer sometime this weekend. Mediation has so far failed to bring agreement.  Sticking points have included workload and health insurance. The state mediator will be available Jan. 13 and Jan 16.

The school district could implement a contract even without union agreement by giving the teachers seven days notice. Teachers can strike if they give the schools 10 days notice. Some believe a strike may be closer because union representatives have been calling substitute teachers and asking them not to cross picket lines in the event a strike is called.

Among the students demands: smaller class sizes, wrap-around support services, less standardized testing and a no school closures, and advanced classes in every school.