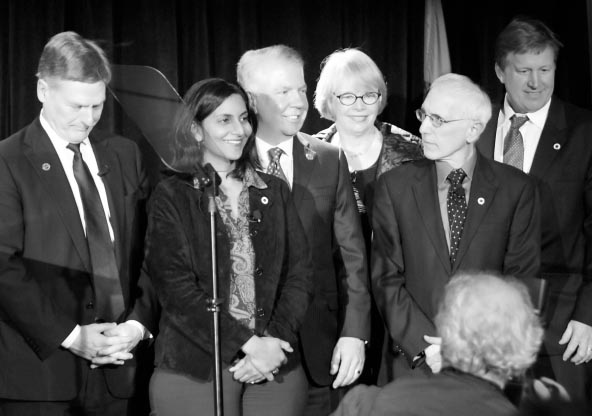 A former community college professor who won a surprising citywide election was sworn in Monday as the first socialist City Council member in Seattle's modern history.

Kshama Sawant of the Socialist Alternative party took her oath and served in her first hearing, then gave a speech to throngs of supporters in a ceremonial swearing-in at a packed City Hall.

“I will do my utmost to represent the disenfranchised and the excluded, the poor and the oppressed, by fighting for a $15-an-hour minimum wage, affordable housing, and taxing the super-rich for a massive expansion of public transit and education,” said Sawant, 41.

Even in this liberal city, Sawant's win surprised many. The incumbent, Richard Conlin, was backed by the political establishment. But bolstered by a grass-roots campaign that harped on economic inequality, Sawant toppled the 16-year incumbent.

“Here in Seattle, political pundits are asking about me: Will she compromise? Can she work with others? Of course, I will meet and discuss with representatives of the establishment. But when I do, I will bring the needs and aspirations of working-class people to every table I sit at, no matter who is seated across from me,” she said.

But just days into the new year, Seattle's new mayor, Ed Murray, has already had a public spat with Sawant. Last week, Murray issued an executive order to raise the minimum wage for city workers to $15 an hour, a move that would affect about 600 workers. Sawant was quoted in The Seattle Times as saying she that Murray's move “shows the mayor's office is feeling the pressure from below to act on the rhetoric from the campaign.”

Murray responded with a lengthy public letter on his Facebook page.

“My commitments during the campaign, including on the minimum wage issue, were just that — sincere commitments — not just rhetoric, as your quote implies,” he wrote.

On Monday, though, the mood was celebratory and resolute.

“I wear the badge of socialist with honor,” she exclaimed.

Seattle City Council staff estimate she's the first socialist to be elected to office in 100 years.