Police Accountability on the Docket 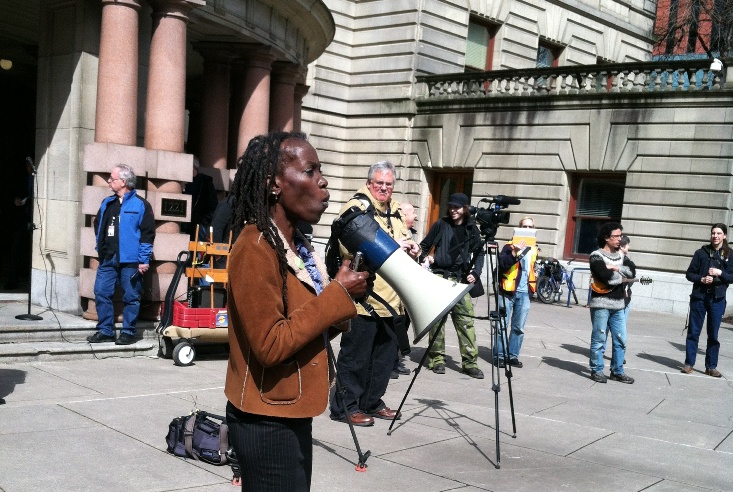 Fair? Adequate? Reasonable?   Those are the values that U.S. District Judge Michael Simon will consider when he rules on the proposed settlement agreement between the City of Portland and the Department of Justice. The agreement came in response to a civil rights investigation showing  Portland Police Bureau used excessive force against people with mental illness.

But before Judge Simon decides on the proposed agreement, he wants to hear whether Portlanders think it is fair, adequate and reasonable. That’s why Simon has set a Fairness Hearing for Feb. 18, where the public is invited to speak out in court, or submit comments in writing or by video.

“The police union is going to make sure their voice is heard. The Department of Justice and the City of Portland are going to give their opinions. So it’s really important that the public has its voice heard,” says Jo Ann Hardesty, a former state legislator and longtime police accountability activist.

Everyone who wants to make a statement is invited to testify at the hearing, set to start at 9 a.m. Tuesday, February 18, 2014 at the U.S. District Courthouse, Courtroom 13B 1000 SW 3rd Ave.

If you care, be there, Hardesty says.

Why it Matters: The DOJ and Portland Police Bureau

The DOJ opened a civil rights investigation into Portland Police Bureau in 2011 after a string of fatalities, including the deaths of James Chasse, Aaron Campbell and  Keaton Otis.  After a 15-month investigation, in September 2012, it released a report.

The report found that Portland Police Bureau had a “pattern or practice” of violating the rights of people who have mental illnesses, or who were thought to have a mental illness. It found officers used excessive force against those people.

The DOJ did not investigate racial bias or profiling, but noted concerns raised by communities of color.  Thomas Perez, then the DOJ’s chief investigator, and now Secretary of Labor, told The Skanner News that the reforms should protect people of color as well as people with mental illness.

Behind closed doors, the city and the DOJ hammered out a proposed settlement that was unveiled in October 2012. Former Mayor Sam Adams and Police Chief Mike Reese agreed to make changes to improve the bureau, but denied the DOJ findings were correct.

The settlement agreement proposed creating a Behavioral Health Unit and expanding the bureau’s crisis response teams.  It made changes to its use of force policy, added yearly performance reviews for officers, and created the positions of compliance officer/ community liaison and compliance coordinator. A 15-member committee would be appointed to oversee the changes. When council approved the agreement the resolution added 32 staff positions to the bureau, a mix of officers and civilians.

“What we were expecting was something that clearly said, you can’t use more than the least force necessary to accomplish the task,” says Dan Handelman of Portland Copwatch, who has been an observer and police accountability activist for 20 years.

“What they said was you have to use less force over the course of your career. But if people right out of the police academy are using more force than necessary, then the training is wrong.”

Some voiced dismay that one of Reese’s first hires to the behavioral health unit was Officer Bret Burton, one of three law enforcement personnel involved in the arrest that led up to James Chasse’s death in custody.

And they say Mayor Hales dropped the ball by pushing ahead with a new police contract that does nothing to improve accountability.

Proposals that would allow the Independent Police Review to compel officers to testify, for example, were withdrawn during a Dec. 18 city council meeting after Police Chief Reese opposed them and the mayor said he wanted more time.

“The DOJ called for the Independent Police Review to do a meaningful independent investigation. The way it is now, the IPR is not independent. It’s dependent on a police commander to order the officer to answer.”

Portland City Commissioners passed the proposals Jan. 8.  They include an expansion of the Citizens Review Committee to 11 members and allow IPR investigators to question police officers directly – but only after officers are ordered to answer the questions and given notice of their rights by a superior officer.  Constantin Severe, director of the Independent Police Review, says Oregon case law on public employee rights requires that someone in a position to hire or fire police officers must give the order to answer the investigators questions.

“If we don’t do that it will end up in front of an arbitrator, and they will ask ‘Are you following the law?” Severe says.

“What I want is that, if we do an investigation or we participate in an investigation with internal affairs, and IPR is asking somebody questions, our investigation can withstand legal scrutiny, and it can withstand the arbitration process. Because I think we do a disservice to this community when we do things because it sounds nice… but at the end of the day we haven’t covered all our legal bases.”

Severe says that the IPR will continue to look for opportunities to make civilian oversight work better.

Handelman says the city should wait until after the Feb. 18 Fairness Hearing before making changes, accountability activists see as inadequate.

“ It cannot be stressed enough how little will change if the Bureau still has a hand in these "independent" investigations, including having a member present at all officer interviews,” he says.

“..the intention of this ordinance appears to be to (inadequately) strengthen the professional staff at IPR,  but give no more authority to the civilians on the Citizens Review Committee. The DOJ-recommended ability for the CRC to direct IPR or Internal Affairs to conduct more investigation, would benefit many people and should be included in any changes to the IPR ordinance.”

In court, Judge Simon ordered mediation between the parties. He also allowed the Albina Ministerial Alliance Coalition for Justice and Police Reform to sit in on the negotiations as a voice for the community, albeit without a vote.

The City of Portland has posted its final policy proposals and all the documents on the case to the portlandonline website.

Hardesty said the AMA coalition will be holding four public events that will help citizens prepare statements. The events will be held during the next six weeks in North and Northeast Portland, downtown and at the Rosewood Initiative in East Portland.  The exact dates, times and venues will be announced soon.

If community members want a stronger agreement, they will get help to say so, Hardesty says.

“I hope thousands of Oregonians show up and let the judge know how they feel. The judge needs to hear from diverse areas of the city and from people who don’t normally speak out.”

You can sign up in advance to speak, give court officials a written statement or send a video statement. Submit the Testimony Form (you can download it from the police bureau’s website) or a similar written submission no later than January 31, 2014. Submissions may be made to the Clerk of the Court in person or via first class mail, or via email to Mary_Austad@ord.uscourts.gov. If anyone is unable to attend the scheduled hearing and wishes to provide oral testimony, he or she may do so by video and submit a DVD.

This article was updated Jan. 8 to reflect the Portland City Council decision.