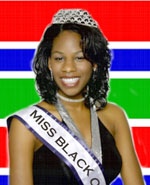 A Benson Polytechnic High School senior will represent Oregon at the 2007 Miss Black USA competition in Gambia, Africa this year.
Portland native Kelci Rae Flowers, 18, is the current Miss Black Oregon USA 2007 and a former Miss Oregon Teen USA 2006 who says she's extremely excited to be heading to Gambia later this month.
"It's going to be a life changing event," Flowers says. "I never thought in a million years I would be blessed with the opportunity of a lifetime ... I'm going back to the motherland, which is very cool."
Gambian President Yahya A.J. Jammeh will host the 30th annual Miss Black USA Pageant, titled "A Royal Journey Back to Our Roots," May 25 through June 2.
Marking 30 years of Miss Black USA pageants, young state pageant winners from across the nation will travel to Gambia – ancestral homeland of Kunta Kinte and Alex Haley, author of "Roots."
The Miss Black USA Pageant and Scholarship Foundation is collecting money and books to take to the elementary schools in Gambia. The national platform for Miss Black USA is diabetes, and state representatives work with local chapters of the American Diabetes Association to educate African Americans about the risks and symptoms associated with the disease and the prevention of diabetes.
As for Flowers, who is active in basketball and track at Benson, participating in pageants allowed her to be more outspoken about issues like diabetes and women's health.
"The reason I decided to compete in pageants was because it gives young women the opportunity to show their intelligence while being feminine," Flowers says.
"Pageants also provide a vehicle to discuss the concerns of our society."
Flowers believes the biggest issue facing young Black women today is education and "the fear of failure."
"I believe the dropout rate is so high among teenagers, especially in the Black community, because they feel like they don't have people who care and who want to see them succeed," Flowers says.
"There are so many young women out there who feel like they don't have what it takes to make it to the top. ... Education is key! Learn as much as you can."
Flowers encourages teachers in this community to take a closer look at their behavior in the classroom.
"...Teachers need to be more involved and make learning fun," she says. "If you don't have fun teaching, how do you expect us to have fun learning?"
Flowers plans to attend Portland State University in the fall, where she will major in communications with an emphasis on journalism.
In the future, Flowers sees herself as a well-known news anchor or journalist, "married with a beautiful house and family ... giving back to the community ... and creating opportunities for our youth."