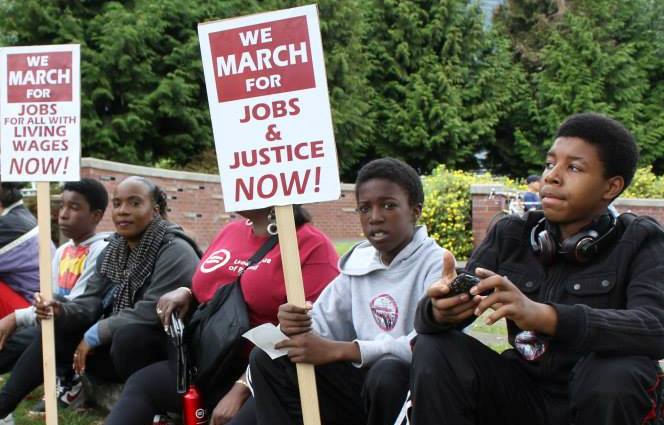 WASHINGTON (AP) — More than 1 million Americans are bracing for a harrowing, post-Christmas jolt as extended federal unemployment benefits come to a sudden halt this weekend, with potentially significant implications for the recovering U.S. economy. A tense political battle likely looms when Congress reconvenes in the new, midterm election year.

For families dependent on cash assistance, the end of the federal government's "emergency unemployment compensation" will mean some difficult belt-tightening as enrollees lose their average monthly stipend of $1,166.

Economy Could Suffer as 1.3 Million People Have Less to Spend

Jobless rates could drop, but analysts say the economy may suffer with less money for consumers to spend on everything from clothes to cars. Having let the "emergency" program expire as part of a budget deal, it's unclear if Congress has the appetite to start it anew.

An estimated 1.3 million people will be cut off when the federally funded unemployment payments end Saturday.

Some 214,000 Californians will lose their payments, a figure expected to rise to more than a half-million by June, the Labor Department said. In the last 12 months, Californians received $4.5 billion in federal jobless benefits, much if plowed back into the local economy.

More than 127,000 New Yorkers also will be cut off this weekend. In New Jersey, 11th among states in population, 90,000 people will immediately lose out.

Started under President George W. Bush, the benefits were designed as a cushion for the millions of U.S. citizens who lost their jobs in a recession and failed to find new ones while receiving state jobless benefits, which in most states expire after six months. Another 1.9 million people across the country are expected to exhaust their state benefits before the end of June.

But Obama has no quick fix. He hailed this month's two-year budget agreement as a breakthrough of bipartisan cooperation while his administration works with Democratic allies in the House and Senate to revive an extension of jobless benefits for those unemployed more than six months.

Check Out the Numbers

The Obama administration says those payments have kept 11.4 million people out of poverty and benefited almost 17 million children. The cost of them since 2008 has totaled $225 billion.

At the depth of the recession, laid off workers could qualify for up to 99 weeks of benefits, including the initial 26 weeks provided by states. The most recent extension allowed a total of up to 73 weeks, depending on the state.

Restoring up to 47 extra weeks of benefits through 2014 would cost $19 billion, according to the Congressional Budget office.

An Extension is Possible

House Democrats led by Reps. Sander Levin of Michigan and Chris Van Hollen of Maryland sought to include an extension through March by offsetting the costs with potential farm bill savings. They were rebuffed.   Senate Democrats and some Republicans plan another push in 2014. Sens. Jack Reed, D-R.I., and Dean Heller, R-Nev., have introduced a bill offering a similar three-month extension, and Senate Majority Leader Harry Reid, D-Nev., has promised to bring it up. But as with much in Congress, an extension is no sure thing.

In phone calls on Friday, Obama told Reed and Heller he was glad they were working together to address the problem. "It defies economic sense, precedent and our values," Obama economic adviser Gene Sperling said in a statement.

Boehner Seeks Plan That Will Sell to Republicans

House Speaker John Boehner spoke with Obama about an extension earlier this month. Boehner and said his caucus would consider the possibility "as long as it's paid for and as long as there are other efforts that will help get our economy moving once again." He said White House has yet to introduce a plan that meets his standards.

For other Republicans, the bar is higher. Many of them look at signs of economic growth and an unemployment rate now down to 7 percent and expected to drop further as evidence the additional weeks of benefits are no longer necessary.

The effect of jobless benefits on the unemployment rates has been fiercely debated for decades. To qualify, people have to be seeking work. Tea partiers such as Sen. Rand Paul of Kentucky argue that the payments aggravate rather than relieve unemployment.

Show Us The Money

The flip side is that the benefits — in addition to alleviating suffering — get spent on consumer goods, stimulating the economy and creating jobs.

Extended unemployment insurance "is really a lifeline to help pay the bills, put food on the table, and put gas in the tank so people can look for work," argued Maurice Emsellem, policy co-director at the left-leaning National Employment Law Project.

Cutting Benefits May Change Jobless Figure But it Hides Reality

Michael Feroli, an analyst at JPMorgan Chase, said ending the extended benefits will lower the unemployment rate by half a percentage point as the long-term unemployed leave the labor force. While that statistical change may look good on the surface, Feroli cautioned the drop could be accompanied by a similar decrease in consumer spending. That would also hurt clothing retailers, car dealers and other Main Street businesses.

Extending the program, on the other hand, would boost GDP growth by some 0.2 percent and increase full-time employment by 200,000 next year, the Congressional Budget Office estimated, but at the price of increasing the government's debt.

Poorest Communities Will Be Worst Hit

Advocates of extended benefits say communities hardest hit by the recession will feel the sudden loss of cash in circulation the most. They cite a set of their own troublesome figures: three jobseekers still competing for each opening; some 4 million people in the ranks of long-term unemployed; unemployment lasting on average 37 weeks, two months longer than most states provide insurance.