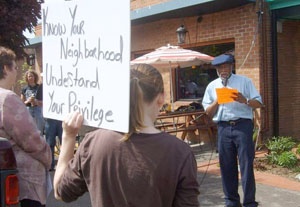 Joshua James stood outside his neighborhood watering hole last Saturday, watching as a group of community activists calmly described why this particular bar was a bastion of racism and sexism.
"This offends me," James said, gesturing toward the speakers of a group called CORS (Citizens Overcoming Racism and Sexism). "I am Mexican American and when I come here I don't have to worry about my race or that people will question me about my sexuality, about whether I'm gay or straight. I have never sensed that racism or sexism was happening here."
James was one of many perplexed Florida Room fans standing outside the North Killingsworth Street bar on April 28, listening as speaker after speaker described the bar and its owners as "the worst part of gentrification."
"I understand that they want to have communication between the two groups," James said. "But claiming racism isn't the way to do it."
CORS supporters said Saturday they were not trying to target the Florida Room, but rather start a dialogue about gentrification and its effect on Portland's African American population.
"The idea is not to tar and feather," said CORS leader Max Julian. "We want to have a conversation ... to create an organization that can talk about these issues (surrounding) gentrification."
However, in a letter sent to staff at Jefferson High School, a CORS supporter states that, "the racist and sexist attitudes displayed by the owners (of the Florida Room) represent the ugly side of gentrification and need to be highlighted and exposed, to help put others on notice that this kind of attitude and behavior will not be tolerated and must change."
CORS supporters said Saturday they were trying to start a dialogue and hoped the Florida Room owners would address complaints over language on the bar's prominent street-side sign.
CORS organizers did not tell the Florida Room owners they planned to rally outside the bar on April 28. Instead, the owners found out from a nearby business owner and from a forwarded copy of the email that circulated through the Jefferson staff list. 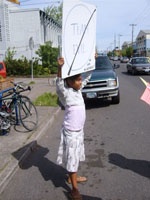 "We are not new residents," Patti Earley, one of the three Florida Room owners said Saturday, after several people asked her how she could come into their community and offend longtime residents. "I've been living here for years. This is my neighborhood too."
But Sharon Martini, a Black Portland resident originally from London, England, who supported the message CORS supporters brought to Saturday's rally, said it doesn't matter that Earley has owned a house in inner Northeast Portland for nearly 15 years.
"They are not seeing where they're privileged and others are not," Martini said. "They are not being sensitive to the issues being presented here."
Julian, the CORS leader, agreed.
"People come into a neighborhood like this and they think nobody is there," Julian said. Their attitude is 'We can do whatever we want,' and this is happening in the context of racism and White supremacy in this community. ... Yet, when we bring this issue up, we're told we're crazy."
Julian read a proclamation Saturday proclaiming his group's actions against the practices that displace African Americans from traditionally Black areas of Portland.
"The culture of the community is being devalued and undermined by some new residents establishing enclaves with different values and showing a complete lack of respect for the thriving, vibrant African American traditions and culture," the proclamation states.
"This affects all the long-term residents of all ethnicities who have valued their community."
At issue in this particular case is the ever-changing language on the Florida Room's outdoor sign. One side used to say "Church of the Bloody Mary" but Earley changed the wording after being told that many members of the Black, church-going community – including teens walking past her bar on their way to and from Jefferson High School — were offended by the mix of church and alcohol.
But the change wasn't good enough, according to many people rallying in front of the Florida Room Saturday.
Some accused the owners of targeting the teens at Jefferson High with their "Go Team Evil" slogan and with a now-defunct slogan that proclaimed "Nancy, Keep it Moist," which some people believed to be a slam against the Humboldt Neighborhood Association president, whose name is Nancy and who had recently demanded that the Florida Room change its sign. 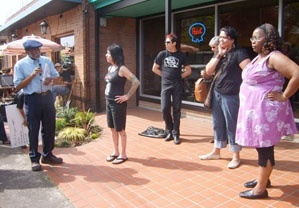 A Florida Room patron stepped forward Saturday to say that belief was way off base.
"I'm Nancy and that was my saying for 2007," the woman said. "It wasn't meant to be sexual, it was about drinking."
As for the "Team Evil," Florida Room owner Mike Hanson said the slogan was meant to be humorous and that the owners never thought teens from Jefferson High School might think it was about them.
After hours of back-and-forth dialogue, both sides seemed to be headed toward a compromise, or at least an agreement that they should sit down and talk about these issues in a mellower environment.
"I do think we all need to relax and talk about this," Earley said.