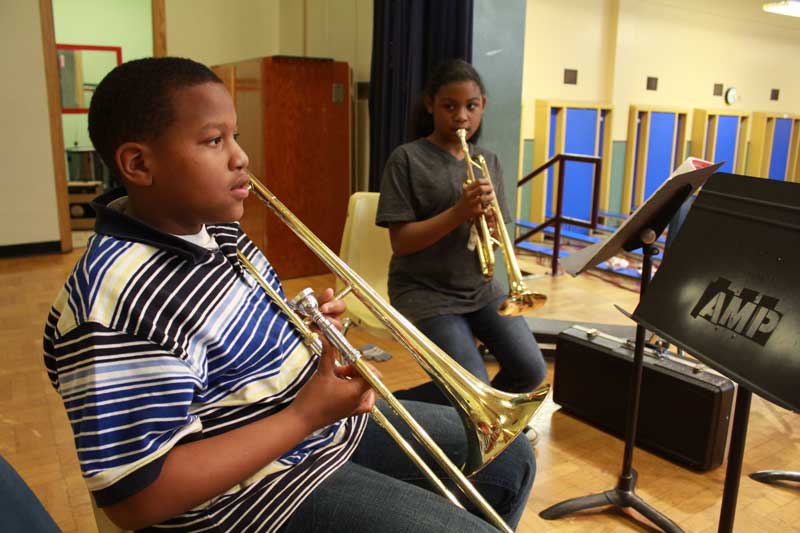 Jazz legend Thara Memory is expanding music education at King School in Northeast Portland. Memory has started a beginning music program that will teach students how to play instruments, and play in a jazz band. See pics of the students in class with Memory here

“It’s such an amazing opportunity to have Thara here,” said King’s principal Eryn Berg.  “Studies over and over again show that kids benefit in many, many ways from having arts and music in schools.”

Students with no prior musical experience are invited to audition for the program, which will create a band with up to 20 student musicians. Twice a week the students will practice together with Memory and each one will be paired up with an expert instrument teacher.

“I’m pulling kids out of the hallway and I’m putting instruments in their hands,” Memory said. “And they will get private lessons from the best professional teachers.”

Memory won a Grammy with his student Esperanza Spalding. And he says seeing his students go on to win fame and acclaim is his greatest joy in life.  Spalding is just one of the students Memory has inspired to become successful musicians. Others include: saxophonists Patrick Lamb and Hailey Niswanger,  trombonist Javier Nero, multi-instrumentalist John Nastos and many more. And Memory’s American Music Project jazz band has won numerous awards.

“People ask me why I don’t tour,” he says. “ They don’t understand that I won that Grammy for being a teacher. I’m not out to make a bunch of money. Teaching makes me feel good.”

Berg says that years of cuts to arts and music programs have impoverished students’ education, and left schools scrambling to ensure children learn about music and the arts.

“Over the years they have cut PE, cut music and cut arts,” she says. “We have raised funds so we can have an African dance class and African drumming, and we have a half-time dramatic arts teacher. But I want to bring a sustainable program. I want Thara here for five years – and I’d rather have 10 or 15 years.

“These kids really deserve to have music here all the time,” Berg says. “Our student body is 90 percent eligible for free and reduced school lunches. Parents don’t have the money to spend on private lessons.”

Memory says he is on a mission to bring back musical education to children in Northeast Portland.

“They’ve had no musical education for 30 years,” he says. “They don’t get the chance to work for success. I want to wake people up so we can change this.”

A trumpeter, composer, conductor and teacher, Memory grew up in Florida. He arrived in Portland in 1970, before gentrification and when Northeast Portland was a thriving musical neighborhood.

“I was on tour with the Joe Tex band, skinny legs and all,” he says. “Portland was really beautiful and the Black community here was exceptionally beautiful in those days.” Memory was impressed that African Americans were living in old three-storey mansions with columns and gracious porches.

“I’d just come out of Watts, which looked like a bomb had exploded,” he says. “They hadn’t fixed anything since the riots. We had a gig in Seattle and I heard we could stop in Portland Oregon and play in this club called the Upstairs Lounge. So when they decided to move on I said, ‘I’m staying”. I figured I could do something here. It was beautiful; the whole community was glued together.”

Memory went to play with a local band. And on the spot, the band leader turned the band over to him. A big band with “older cats from the community” they played at a club called Lou’s Higher Ground, he says. Working in King School is like coming home, Memory says.

“Hopefully I can bring some musical culture back to that neighborhood. So if you want me to accomplish something—support me.”