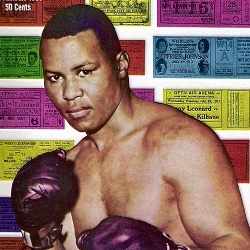 Former heavyweight champion boxer Thaddeus Spencer Jr. died in Vallejo, Calif., Dec. 13, at the age of 70.  Born in Tuscaloosa Ala., March 28, 1943, Spencer was the third in a family of 12. His parents, Thad Sr. and Marie Spencer moved to Portland’s Woodlawn neighborhood when he was an infant.

“He fought through as much as he could for as long as he could,” said his son Lance Spencer. “He died peacefully in his sleep. He had no struggles.”

During the 1960s Spencer was a top contender for the heavyweight championship of the world, joining an elite group of boxers that included Muhammad Ali, Joe Frazier and Ernie Terrell.

“He was the number one contender for heavyweight champion,” says Paul Brown a childhood friend and fellow boxer. “He was the baddest man on the planet.”

Spencer was among the great boxers who blazed a trail for all Black athletes, by increasing the rewards they received for their sporting prowess.

“These guys were monsters in that era of the 60s,” Brown said. “When Ali and Frazier earned $2.5 million in 1971 for their first meeting, that was unheard of for African Americans. And Thad was one of those fighters. They came right out of the civil rights era to make that kind of money. He paved the way for all the NFL and NBA players today. He paid the price.”

Spencer never fought Ali or Frazier, but he beat Doug Jones who had won his bout with the young Cassius Clay. And he beat Ernie Terrell, Brian London and Amos Lincoln all top flight heavyweights of the day.

“He had the fastest hands in the sport,” says Lance Spencer. “He was just a natural.”

Spencer started his boxing career at the storied Knott Street Gym, which still operates at Dishman Community Center. The training he received there helped him to a Pacific Northwest Golden Gloves Championship at age 16.

But Spencer encountered many challenges in his life. He turned professional at just 17, instead of pursuing an Olympic career because he wanted to support his family. And even as he approached the peak of his profession, he was falling prey to alcohol and drug addiction. Even his tremendous talent couldn’t save his boxing career.

“He endured a lot of pain during his life,” says Brown. “He endured tremendous pain before he became successful just being in the trenches of the fight game.

“He was a good guy. He tried hard hard all his life. He truly was a champion and he has an undisputed crown today.”

In 1975 Spencer was shot five times in a Portland bar. He shot back in self-defense killing his attacker. That same year he would be shot again, and also run down by a car.

But Brown recalls Spencer would get a standing ovation when he entered the Expo Center, even after his glory days.

“I think he touched many people who admired who he was and what he did.”

Later Spencer tackled his addictions. He worked as a promoter for a time. And he grew close to family members.

“He was a family man; he loved his family,” says Lance Spencer. “He was a big teddy bear. He was very funny. And he was a very classy guy. He lived life his way.”

In his later years Spencer lived with his son in Vallejo, Calif. Despite having dementia, he posted notes to himself around the home to help his memory. And he was happy and optimistic by nature, says Lance.

“I miss him and I’m that selfish that I want to have him here. But he’s in heaven now and has no more pain and no regrets.”