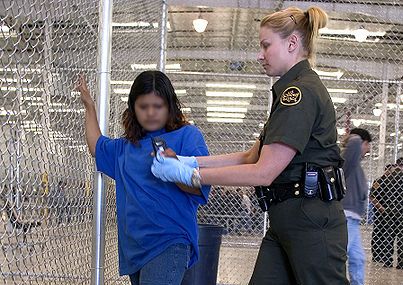 With immigration legislation stalled in Congress, Hispanics and Asian-Americans say getting relief from deportations is more important for many of the 11 million immigrants here illegally than creating a pathway to U.S. citizenship, a new study finds.

Two polls released Thursday by the Pew Research Center expose a potential conflict for two minority groups that voted overwhelmingly last year for President Barack Obama, a Democrat. Obama is under pressure from immigration supporters to use his executive power to stop deportations.

Strong majorities of both Hispanics and Asian-Americans continue to back a pathway to citizenship, 89 percent and 72 percent, respectively. Still, by 55 percent to 35 percent, Hispanics said being able to live and work in the U.S. legally without the threat of deportation was more important. Among Asian-Americans, the ratio was 49 to 44 percent.

Among both groups, noncitizens are more apt than citizens to consider it important to remove the threat of deportation.

Not all Latino immigrants in the U.S. seek to become American citizens, according to the Pew study. Of Hispanic immigrants who came to the U.S. legally, just 44 percent have become citizens, due in part to the cost of applying as well as worries about passing the English part of the citizenship test. Among immigrants from Mexico, the largest country of origin, the share is even lower, at 36 percent.

"There's no question that these groups want a pathway to citizenship for the unauthorized, but the surveys also show that, especially for Latinos, it's the threat of deportation that casts the longest shadow on their communities," said Mark Hugo Lopez, Pew's director of Hispanic research and author of the report.

Earlier this year, the Senate passed far-reaching immigration legislation that would strengthen border enforcement and allow a 13-year pathway to citizenship. But activity has stalled in the GOP-controlled House, with the citizenship provision a major sticking point.

The delay has put pressure on Obama to act, as he did last year in halting deportations for some young immigrants. Under his administration, deportations of immigrants in the country illegally have hovered near 400,000 annually, with more than 9 in 10 of the deportees from Latin America. That level continues a trend of rising deportations that began during the George W. Bush administration.

Any action by Obama to halt deportations would mean that immigrants here illegally would in effect get interim legal relief; however, only action by Congress could give the immigrants legal status.

In recent weeks, 29 House Democrats urged Obama in a letter to suspend deportations; last month, "executive order" was the rallying cry of hecklers at an Obama Democratic fundraiser in San Francisco.

According to the Pew study, if significant immigration legislation does not pass this year, a plurality of Hispanics (43 percent) and Asian-Americans (48 percent) would lay most of the blame on Republicans in Congress. Still, sizable portions of each group — 34 percent of Hispanics and 29 percent of Asian-Americans — say either Democrats in Congress or Obama would be most responsible.

In the 2012 election, 73 percent of Asian-Americans voted for Obama, below the 93 percent of African-Americans and about the same as Latinos at 71 percent, according to exit polling. The lopsided margins prompted many Republicans to express initial support for an immigration overhaul as a way of winning back Hispanic and Asian-American voters, some of whom expressed concern about the GOP's anti-immigration rhetoric.

The Pew surveys show that the two minority groups continue to view Obama more favorably than the overall U.S. public. About 54 percent of Hispanics and 62 percent of Asian-Americans say they approve of Obama's job performance. Just 41 percent of the general public say the same.